ATLANTA (WDEF)- Ahead of Monday night’s debate against Governor Brian Kemp and the start of early voting, Democratic challenger for Georgia’s gubernatorial election Stacey Abrams held a virtual press conference where she took questions from reporters primarily across the state of Georgia.

News 12 was the only outlet from Chattanooga to attend the conference, and got to ask Abrams for her response to a couple of issues that are affecting our area here in Northwestern Georgia.

On the topic of the recent Labor Day weekend flood disaster in Chattooga County and her plans for future disaster relief, she said that, “I was proud that my campaign reached out after the disaster to offer aid, and to send resources and supplies, because I understand what it feels like. I grew up in a hurricane prone community in Mississippi, and I know what it feels like to be left out, and to be left behind when disaster strikes but the aid doesn’t show up. That’s why my campaign is the only campaign with a comprehensive plan on our website for how we will tackle resilience. We know that these storms are going to become more and more frequent. We know that the challenges faced in our state are not being fully addressed. That we have to do better by our people and we have to have better plans for how we are going to evacuate people. How we are also going to help people shelter in place?”

Additionally, on the topic of increasing economic opportunities across Northwestern Georgia, Abrams said that,  “Georgia has a real opportunity because of the Inflation Reduction Act and the bipartisan Infrastructure bill to create 25 to 40,000 new jobs in advanced energy, technology, and other areas.”

She has three goals that if elected she stated she wanted to accomplish in regards to rural Georgia. First, she wants to bring back technical colleges with free tuition. Second, she wants to put more money into small businesses. Third, she wants to as she put it, “more fairly distribute investments across the state”.

The gubernatorial election for Georgia is a rematch from 2018. The general election is scheduled for Tuesday, November 8. 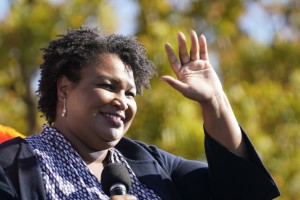 FILE – Stacey Abrams speaks to Biden supporters as they wait for former President Barack Obama to arrive and speak at a campaign rally for Biden at Turner Field in Atlanta, Nov. 2, 2020. Incumbent Gov. Brian Kemp is far outraising his main Republican primary challenger, former U.S. Sen. David Perdue, leaving Perdue with less than $1 million in cash on hand while Kemp had $12.7 million in his main campaign account. Democrat Abrams raised $9.25 million after entering the race only a few days ahead of Perdue. (AP Photo/Brynn Anderson, File)