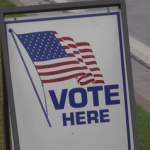 Two republicans with plenty of political experience are in a tight race for the District 53 senatorial seat held for 22 years by Jeff Mullis.
Colton Moore serves a term as a state representative from Dade county from 2018 until 2020. He said he is the best candidate because of the initiative he has shown on the topic of election integrity.

“I was also the first elected official in the state of Georgia to call for a special session to review the fraud in Donald Trump’s  Presidential Election when every other republican was just sitting on their hands,” Moore said. “My agenda going forward is first and foremost election integrity. Removing drop from every county in Georgia.”

Moore faces former Catoosa County Commissioner and Mayor Steve Henry, who gave up that job to run for the state office.

“Being that I’ve been in local government and had to meet the needs of local folks, I know what it’s like and I know what they need and what they don’t need and I have an established relationship to communicate with them,” Henry said. “I will be able to give them support in their everyday operations and that is just something most legislatures don’t have.”

Henry, who is a small business owner, says the state has had enough of politicians that say one thing to get elected, then do the exact opposite once they are in office.

Moore, who lives in Dade county, lists his profession as auctioneer, says he is not beholden to any special interest groups, such as the Georgia Chamber of commerce.

Residents of Dade. Walker and Catoosa will decide that race today. There is no democratic candidate.