Sully blasts Boeing and FAA as “too cozy”

Captain Chelsey “Sully” Sullenberger, who piloted US Airways Flight 1549 to safety in the “Miracle on the Hudson” in 2009, blasted Boeing and the Federal Aviation Administration for their roles in the two recent plane crashes involving the Boeing 737 Max 8. In a blistering op-ed published Tuesday on MarketWatch, Sullenberger said “there is too cozy a relationship between the industry and the regulators” for proper oversight to be ensured.

“Boeing and the FAA have been found wanting in this ugly saga that began years ago but has come home to roost with two terrible fatal crashes, with no survivors, in less than five months, on a new airplane type, the Boeing 737 Max 8, something that is unprecedented in modern aviation history,” Sullenberger wrote.

Ethiopian Airlines Flight 302 crashed a few minutes after takeoff on March 10, 2019, only five months after Lion Air Flight 610 crashed soon after takeoff on October 29, 2018. Investigators have found “clear similarities” between to the two crashes, especially in the apparent struggle each of the planes’ flight crews experienced trying to manage the airplane’s automatic stabilization system known as MCAS, a new software program Boeing added to the 737 Max 8. The system was approved by the FAA before the plane’s debut in 2017.

Rescuers work beside the wreckage of an Ethiopian Airlines’ aircraft at the crash site, some 50 km east of Addis Ababa, capital of Ethiopia, on March 10, 2019. Getty

As more details emerge about the two crashes, Boeing and the FAA have come under fire for the approval process. Much of the controversy centers around reports that pilots and flight crews around the world were unaware that MCAS was added to the software of 737 Max 8s and that the pilots were not specifically trained on it.

The crew of the Lion Air Flight may not have been aware that the system was apparently the cause of their flight control problems. Reuters reports that cockpit recordings reveal the pilots desperately searched for information about how to correct the plane’s dive, and according to Bloomberg News, the same Lion Air jet narrowly avoided crashing the day prior because an off-duty pilot who knew about MCAS and how to deactivate it just happened to be traveling along with the uninformed crew.

Sullenberger, in his op-ed, placed the blame at Boeing’s feet for the lack of communication and training of pilots.

“Boeing, in developing the 737 Max 8, obviously felt intense competitive pressure to get the new aircraft to market as quickly as possible. When flight testing revealed an issue with meeting the certification standards, they developed a fix, Maneuvering Characteristics Augmentation System (MCAS), but did not tell airline pilots about it. In mitigating one risk, they seem to have created another, greater risk.” 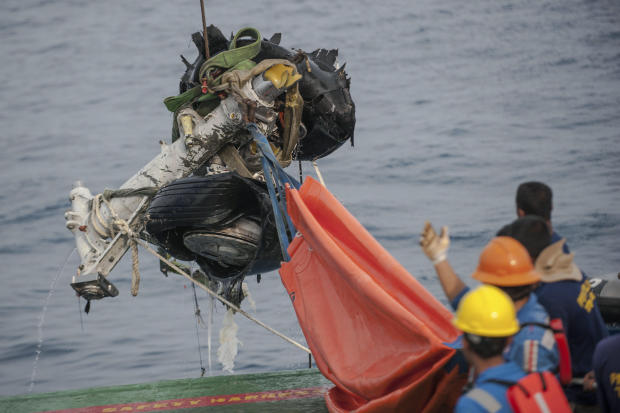 Rescuers use crane to retrieve part of the landing gears of the crashed Lion Air jet from the sea floor in the waters of Tanjung Karawang, Indonesia, Sunday, Nov. 4, 2018. Fauzy Chaniago / AP

The retired airline captain also criticized Boeing’s response to the Lion Air crash, pointing out that a new software fix designed to avert automatic MCAS takeover has not been implemented even five months after the first crash, and that Boeing CEO’s personally lobbied President Trump to keep the 737 Max in flying in U.S. airspace before the White House finally ordered the planes grounded last week.

Sullenberger directed some criticism at the FAA as well, noting that the agency has been underfunded for years and inadequately staffed to properly conduct its role of overseeing aircraft certification. As has been reported, aircraft manufacturers like Boeing play a significant role in their own oversight during an airplane’s delivery, a relationship which Sullenberger said leads to “conflicts of interests.”

“This, of course, has created inherent conflicts of interest, when employees working for the company whose products must be certified to meet safety standards are the ones doing much of the work of certifying them,” he wrote. “There simply are not nearly enough FAA employees to do this important work in-house.”

Ultimately, Sullenberger stated that any resolution will lie with Congress and the White House, who have power over the federal budget to increase the the FAA’s resources to improve oversight during the certification process.

“Let me be clear, without effective leadership and support from political leaders in the administration, the FAA does not have sufficient independence to be able to do its job, which is to keep air travelers and crews safe,” he wrote. “Oversight must mean accountability, or it means nothing.”