Billboards & lawsuits show Saints fans aren’t over it yet

NEW ORLEANS (AP) – The Los Angeles Rams and New England Patriots will be welcomed to Atlanta for the Super Bowl by several billboards saying “Saints got robbed” and “NFL bleaux it.”

WDSU-TV reports Louisiana car dealership owner Matt Bowers paid for 10 billboards across Atlanta through Feb. 3, including one outside Mercedes-Benz Stadium.

New Orleans Saints fans are still upset over a missed call that likely cost their team a ticket to the Super Bowl. Los Angeles cornerback Nickell Robey-Coleman committed a blatant pass interference penalty that wasn’t called, leading to a tie score in regulation play and an overtime loss for the Saints.

Saints coach Sean Payton talked to the NFL office after the game and was told the penalty should’ve been flagged. 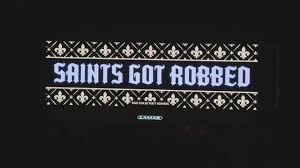 NEW ORLEANS (AP) – In the legal equivalent of a Hail Mary pass, two New Orleans Saints season ticket holders have asked a judge to reverse the result of the NFC championship game that sent the Los Angeles Rams to the Super Bowl – or order a do-over.

Tuesday’s state court filing says NFL Commissioner Roger Goodell should implement a league rule governing “extraordinarily unfair acts.” Remedies include reversal of a game’s result or the rescheduling of a game – in its entirety or from the point when the act occurred.

At issue is the failure of officials to call interference or roughness penalties when a Rams player leveled a Saints receiver with a helmet-to-helmet hit at a crucial point in Sunday’s game. The NFL hasn’t yet responded. A hearing is scheduled Monday.