Taking Fridays off: Why it’s good for business

For some of you, the weekend you’re enjoying started a bit earlier thanks to a “Summer Friday,” the growing workplace practice Conor Knighton explores in our Cover Story (This story was previously broadcast on July 30, 2017):

The hands on the office clock always seem to move a little slower on a Friday afternoon. Especially during the summer. Outside, it’s gorgeous, and the last place anyone wants to be is stuck inside an office, waiting for 5 p.m. to finally start the weekend.

But this summer, graphic designer Jim Doussard will be kicking things off a little early, spending every other Friday at his summer home in Maryland, tinkering in his garage … building clocks, instead of watching one.

“I love to be in my studio,” he said. “It’s borrowed time, if you will. I don’t owe the office any more time that week. I don’t owe my family, my friends. I can just go in my studio and create and just be me.”

Doussard is not playing hooky; he is encouraged to take the day off by Washington, D.C. architecture firm HOK. After working slightly longer hours Monday through Thursday, Doussard can take advantage of an increasingly popular perk: a “Summer Friday.”

“A summer Friday is when companies let their employees leave early on Fridays during the summer,” said Brian Kropp, HR Practice Leader at research firm Gartner. “We’ve just seen a huge increase in the number of companies that are offering it.”

This is what Friday looks like at more and more companies during the summer months.

Last year Gartner surveyed Fortune 1000 companies and found that 42% offer some type of “Summer Friday,” up from 21% just two years prior.

“The companies that have made the decision to give this benefit are giving it every summer because they see it’s valuable,” said Kropp.

From Memorial Day to Labor Day, L’Oréal’s headquarters shuts down at 1:30 p.m. sharp. The beauty company has been allowing its New York City employees to beat the weekend rush out of the city for the past two decades.

Summer Fridays are a tradition that’s thought to have started in Manhattan advertising and publishing firms back in the 1960s. But now, employers across the country – from shoemaker Nike in Oregon, to boat engine maker Mercury Marine in Wisconsin – have started offering a version of the perk.

And it’s not just out of the goodness of their hearts.

“What they found is, by giving their employees a little bit of time back and giving them that gift of time, they like their employer much more,” said Kropp. “They actually become much more loyal. They work harder. They’re more committed to their organization. It really shows that their employer cares about them and wants them to have a great work/life balance.” 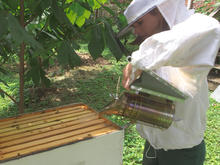 Instead of sitting in her architecture firm’s office on Fridays, Erica Thum tends her bees. Sweet!

The worker bees in Erica Thum’s colony need tending to, and it’s a chore this landscape architect is only able to accomplish on her occasional Fridays off. Her hobby is honey.

“I’m going to take that day to weed the garden, and check on the hives, see how the queens are doing, and pull some of the honey frames, and do some extracting,” Thum said.

Back at the office, she sits a few desks away from colleague Oliver Vranesh, who uses his bonus hours to hang out with his little sister. One Friday at a time, he’s been writing a children’s book for her.

Right about now, I’m sure many of you have started writing a “Why don’t WE get summer Fridays off?” email to your bosses.

And that’s kind of the point.

Knighton said to Vranesh, “I assume you have friends at other companies, other industries, who don’t have this perk?”

“Oh, yeah. I like to just brag it in their face all the time, if I can!” Vranesh replied.

Take a peek on Instagram and Twitter on Friday afternoons, and you’ll see happy employees gloating about their bonus hours. It’s a perk that can be used as a recruiting tool.

Perhaps no company loves Fridays more than TGI Fridays. The Dallas headquarters of the restaurant chain looks like a party starting at 2 p.m. on a Friday, no matter what season it is.

Masullo is VP of marketing (and on “Endless Fridays,” the resident DJ). After an hour of cocktails, everyone – including the CEO – heads out the door.

Out on the lake, Masullo is able to get a head-start on the weekend with her family. 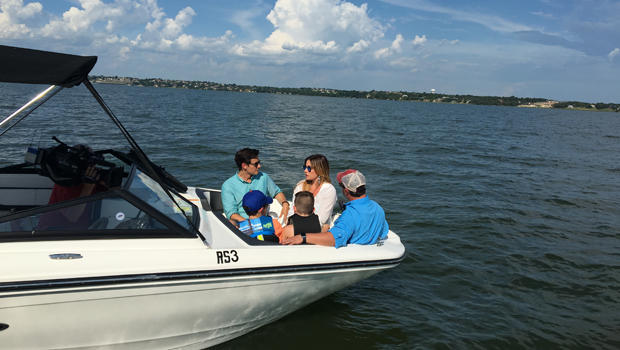 Caroline Masullo spends the Friday of her work week far from work, thanks to her company’s policy of Summer Fridays.

Knighton asked, “If it was a Wednesday afternoon at this time, where would you be?”

Since Friday afternoons are typically the most unproductive part of the week, giving this time off doesn’t necessarily cost companies that much. But the return can be priceless.

“I think it’s less about the three hours of time, and more so (at least for me) it says something about this brand and the way that they value individuals’ personal time,” Masullo said.

It’s worth noting that Summer Fridays are a perk mostly reserved for white collar workers. The staff at TGI Fridays restaurants certainly don’t get the afternoon off.

No matter how popular this perk becomes, there are plenty of jobs where you simply CAN’T take off on Friday afternoons … especially not if you work on a show that airs on Sunday mornings.