CHICKAMAUGA, Georgia (WDEF) – The idea of illicit drugs in children’s Halloween candy is not a new concern, however this year, the focus is on rainbow fentanyl. A brightly colored fentanyl pill that resembles candies like ‘SweeTarts’ or ‘Smarties’.

The US Drug Enforcement Administration has said it’s a quote, “deliberate effort by drug traffickers to drive addiction amongst kids and young adults.”

“Rainbow fentanyl—fentanyl pills and powder that come in a variety of bright colors, shapes, and sizes—is a deliberate effort by drug traffickers to drive addiction amongst kids and young adults,” said DEA Administrator Anne Milgram.  “The men and women of the DEA are relentlessly working to stop the trafficking of rainbow fentanyl and defeat the Mexican drug cartels that are responsible for the vast majority of the fentanyl that is being trafficked in the United States.”

Fentanyl is 100 times stronger than morphine. Thomas Farmer with the TBI said even a trace amount, non-visible to the human can be lethal to children.

“The realistic part of it is, we’re gonna see it. We may as well plan for it. These are not new tactics, it just is just a little bit different this time because it’s it’s fentanyl,” said Farmer. “Rainbow colors are attractive and that’s something, you know, children are specifically being targeted with is color. Using colors to  market dope or drugs is not a new concept in the in the drug world and drug enforcement. But again, particularly fentanyl, and tablets, and now throw in at the timing of it here at Halloween. Those make them a particular concern.”

The Chickamauga Police Department released this photograph and statement on facebook this week warning the public of rainbow fentanyl after finding tablets in a local public restroom.

“The fact that we are having to make a post warning parents of a new dangerous drug that has entered our community saddens and angers us. This is a PSA to inform parents of a newer form of fentanyl called “Rainbow Fentanyl.” It gets this name because it comes in several different shapes and is brightly colored to look like candy. We know Halloween is coming up. We ask parents to be vigilant with inspecting children’s candy before they consume it. We also ask parents to have a conversation with your children about fentanyl, how they may encounter it and what to do if they encounter it or any other drugs.” 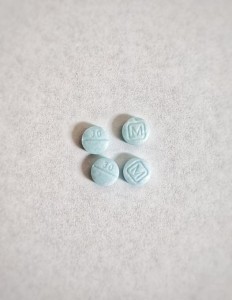 If you encounter fentanyl in any form, don’t touch it and call 911
Visit this link to learn more.
https://www.dea.gov/…/dea-warns-brightly-colored…
Categories: Featured, Local News
Tags: rainbow fentanyl