TBI has trouble arrested Father for the death of his son 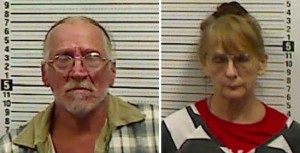 BIG SANDY, Tennessee (WDEF) – TBI agents attempted to arrest a man for the murder of his own son last year in West Tennessee.

But it wasn’t easy.

That’s near Paris along the Tennessee River west of Nashville.

TBI agents investigated the case and determined that Grinnell’s father killed him.

And Grinnell’s wife, Kathleen Ann, was also indicted with Accessory After the Fact.

TBI agents, Tennessee troopers and Benton County Sheriff’s officers went to their home on Tuesday to arrest them.

But they say Grinnell refused to cooperate.

They say he tried to run over two of their agents with a pickup truck and then barricaded himself in the home with his wife.

Eventually, they took both of them into custody.

But the Grinnells now face even more charges.

Jay Grinnell has been charged with two counts of attempted murder against the officers.

And Kathleen was charged with resisting arrest.