He escaped police custody in Marion County after an Alabama jailbreak 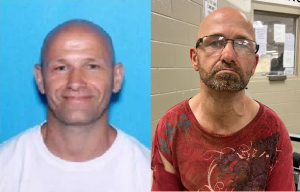 smiling photo was from TN Most Wanted, frowning is post-capture

JASPER, Tennessee (WDEF) – Johnny Lewis Payne is back in custody, but we’ll see how long this will last.

Payne has a knack for escaping from law enforcement.

A few weeks ago, he escaped from an Alabama prison where he was serving 20 years for receiving stolen goods.

He was recaptured a few days later back in his old Bridgeport stomping grounds… on the Tennessee side of the border in Marion County.

But Payne escaped again while being taken for a mental health evaluation in Chattanooga.

On Friday, the TBI put him on their latest 10 Most Wanted List.

Then on Monday night, he was spotted by officers in the Huntsville area.

After a police chase, he crashed and was taken into custody.

Back To School Bashes help thousands of families across Hamilton County