The art of globe making

The art of the globe is second nature by now for the man of the world Martha Teichner is about to drop in on (This story was originally broadcast October 8, 2017):

Tell me this isn’t exactly what you’d imagine the workshop of some crazy, Victorian genius would look like.

In the era of Google Maps, who makes a living smoothing wrinkles out of a continent, or coloring in the coast of Madagascar?

Making globes by hand was pretty close to a lost art when Peter Bellerby decided to give his father one for his 80th birthday in 2008, and couldn’t find any worth buying.

“You thought it would be easy?” asked Teichner.

“I thought it would be really easy.”

Two years later, he’d sold his house and his car to bankroll his globe-making. Meanwhile, his father’s birthday came and went. “More than one of them, yeah!” Bellerby laughed. 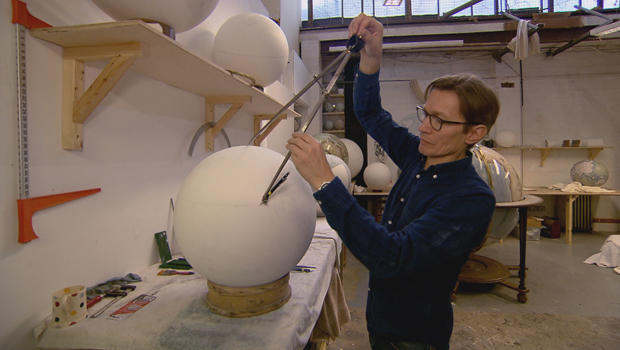 Bellerby had to improvise.  He had to crack the mystery of how exactly it was done in centuries past: “There isn’t a manual for globe-making. Mathematically I had my head around how it works relatively easily. That wasn’t the struggle.  The thought of actually applying a piece of flat paper to a sphere, that was the struggle.”

He always starts with Alaska as the first piece. Why? “We could realistically start in any position,” he said. “It just is nice, watching the world develop.”

To work at Bellerby & Co. Globemakers in North London, patience is required. God is said to have created the world in six days. But at Bellerby’s it takes at least six months even to learn how. 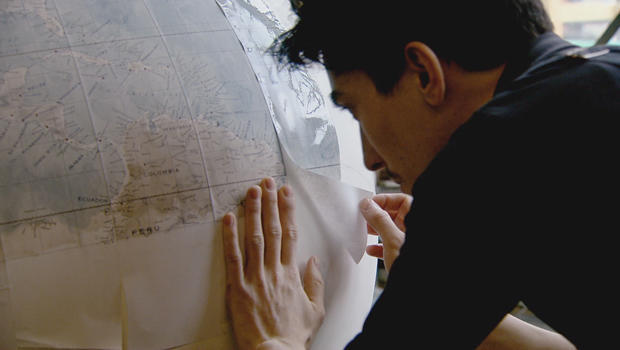 It may take months to create a single globe.

Teichner tried her hand at cutting a continent: “If you’ve had too much coffee, this could be really, really disastrous,” she said.

Then, the strip of paper is dipped into plain water and then stretched over the globe. “Try pushing the paper in both directions,” Bellerby instructed.

“Oh, it’s hard.  It makes wrinkles.  And how do you get the wrinkles out?”

“You don’t make them in the first place.” 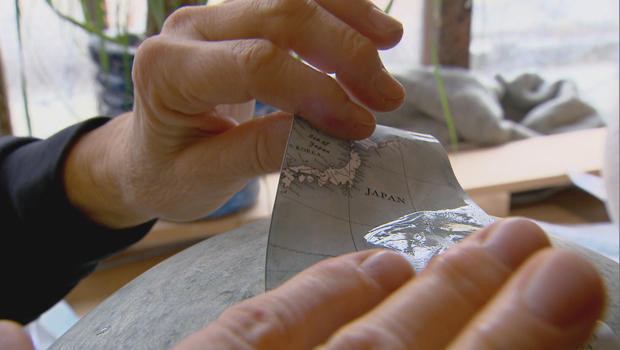 The company can make only around 600 globes a year, many on commission.  They’re back-ordered for months.  Even the legs for stand-models are crafted by hand.

So, a Bellerby globe is not cheap.  The smallest – soccer ball-sized – runs more than $1,300.  The biggest, the Churchill, 50 inches in diameter, is more than $80,000. The cost is a function of both its size and the labor required over the year and two months it takes to make it. 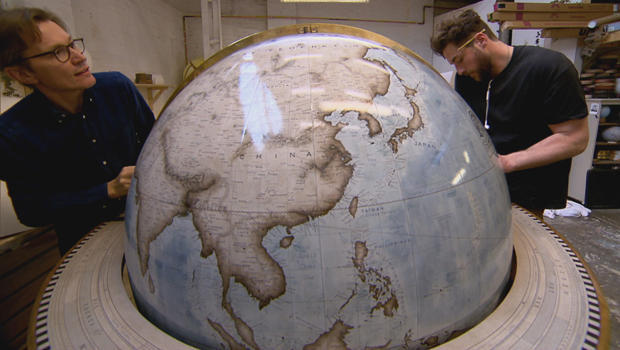 The Churchill was inspired by globes the same size that Gen. George Marshall had presented as Christmas presents to Winston Churchill and President Franklin D. Roosevelt during World Ear ii.

Bellerby says he’ll only ever make 40 Churchills. And when you spin it, it will keep spinning for two minutes all by itself.

For a globemaker, the map can be tricky, whereby some countries must be given two names, such as Taiwan/Chinese Taipei.

And then there are disputed borders, such as the Kashmir region: “If I sell a globe in India, I can go to prison for six months if I mark it incorrectly,” he said.

Before he made globes, Peter Bellerby worked in television, ran a bowling alley and a nightclub, restored houses and an antique car.  He’s begun working on a 1960 Bentley.

“The globes and [the Bentley]; what’s the common denominator?” asked Teichner.

So, whether it’s cars or globes, Peter Bellerby has made the art of the elegant anachronism his life’s work.