As we continue to take a look at the Great American political divide, a lot of focus tends to get put on the media, especially the 24-hour news networks. What about social media – how does that influences our opinions?  Bill Priestley takes a look at the digital influences that have a direct impact on this divided culture.

This is the third step of a four part series to help understand the Great American Divide. Here is part 1 and part 2.

Bring up the idea of a political divide and you’re bound to hear someone say something like this from Jim Hall, former Chairman of National Transportation Safety Board, “I think the media has to take a little responsibility.”

Or this from Marsha Yessick, the Chairman of the Hamilton County Republican Party, “I must say that a lot of this blame has to go onto the media.”

Kevin West, the Program Director for Cumulus Media, is hesitant to blame the media, “The phrase, the media, always causes me problems because nobody really defines that. So the media is whatever it is to the person who’s using that phrase.”

If you’re just talking about mainstream news media, the dividing lines between what is opinion and what is news have been blurred over time.

Some have argued that this has turned the realm of the 24-hour news networks into a ratings competition.

Dr. Michele Deardorff is a Political Science Professor at the University of Tennessee at Chattanooga, “What’s more interesting? Reasonable people sitting down and having thoughtful conversations about difficult problems and trying to find solutions from different ideological points of view or two extreme people screaming at each other never finding a place.”

But the mainstream news media can’t be solely blamed for the political divide. They can say all they want but Reverend Kenneth Love says the viewers make the real decisions.

“As far as their contribution to where we are right now, we cannot say they it hasn’t been a contributing factor. The major problem with it is how those who listen, use it.” 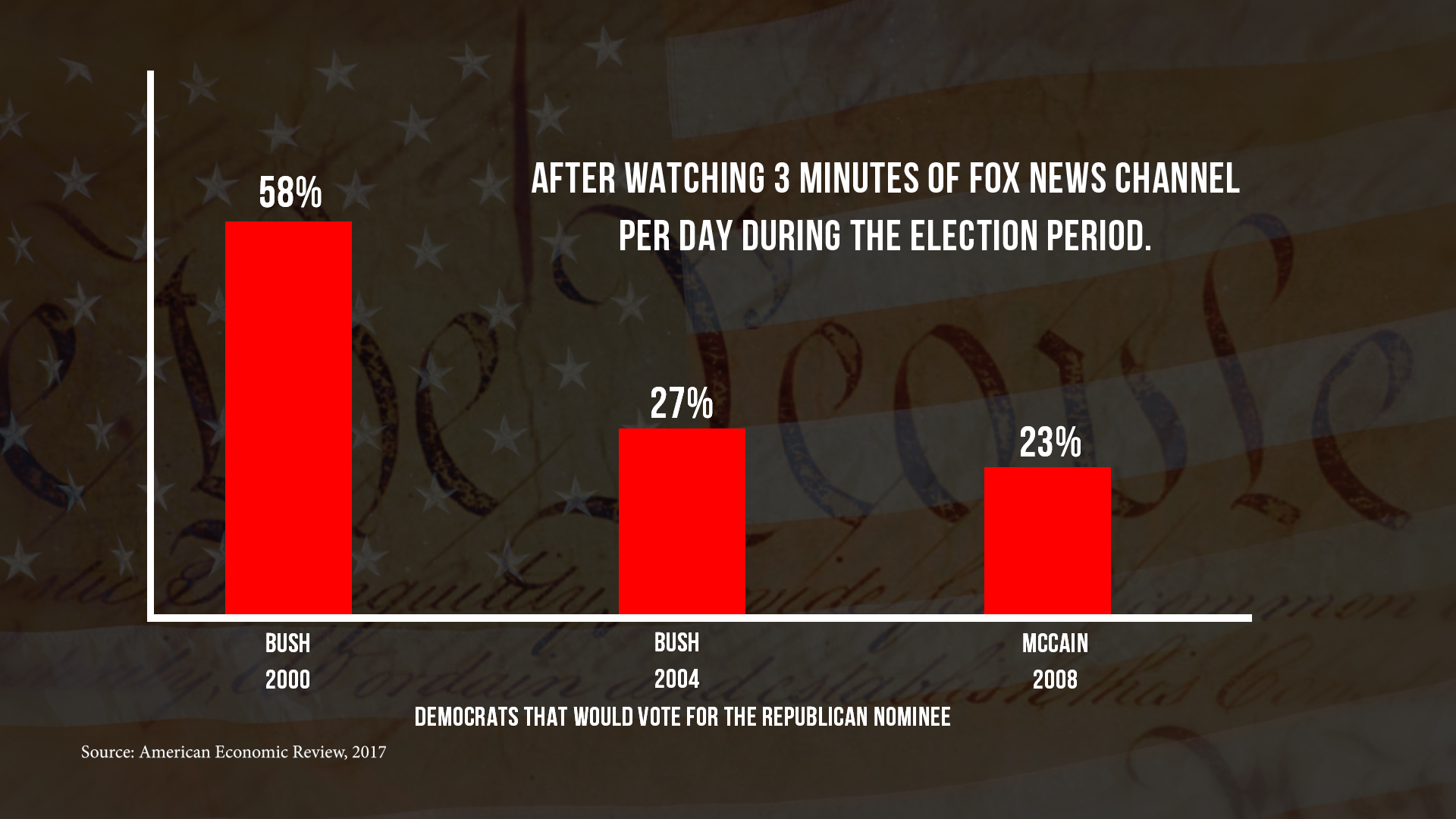 Does the news media have an impact on you as a voter? One study says yes. In a 2017 study done between Emory and Stanford University published in the American Economic Review of people identifying as Democrats 58% would vote for George W. Bush in 2000. 27% would vote for Bush again in 2004 and 23% would vote for John McCain in 2008 after watching just three minutes of Fox News channel per day over the course of an election period.

The greater impact that news media has had on the American public has happened through social media and that comes with how you get your news. For many, it used to be a television report or a newspaper that would come once a day. Now it’s very different.

Which means that partisan media outlets can pick whatever details they want to give you that will support their political position.

Kevin West, “Now more than ever, if you just watch one particular news outlet, you do not get a well-rounded view of what the world is thinking.”

Which leads us to the influences that social media has had on our lives in the last five years. Dr. Michele Deardorff says that its impact politically has been nothing short of monumental.

“The social media has made it possible for people basically to intellectually isolate and only hear people and only hear points of view that reflect their own preferences and opinions.”

Dr. Sherry Hamby, Professor of Psychology at The University of the South, has been studying social media and says this might be the biggest change to human psychology since the dawn of humanity.

“It’s probably been one of the most dramatic transformations that civilization has ever seen because in a very incredibly short period of time we’ve gone to where so many of our communications are mediated through this form that didn’t even exist a few decades ago.”

Dr. Hanby states that the loss of inhibitors loses all context of a message between two people.

“You disarmed people with a smile or with the gesture or a handshake and that we have all of these signals that that keep the level of aggression and interpersonal interactions suppressed and that taking that stuff away has gone like road rage on steroids.”

So when it comes to talking about political subjects and social media, the divide only gets worse. When we listen to news sources we agree with and cull our friends and followers to lessen the chances of confrontation.