The songs that got explorer through solo Antarctic trek

Two explorers recently made history by crossing Antarctica alone and without any help on the way. No previous solo attempt across Antarctica had been successful; in 2016, British explorer Henry Worsley died shortly after trying to complete the trek.

But on November 3 last year, 49-year-old British army Captain Lou Rudd and 33-year-old American athlete Colin O’Brady each attempted the daunting journey separately. A plane dropped them about a mile apart on the Ronne Ice Shelf. For more than 900 miles, each man skied across the world’s coldest and driest continent without a single day of rest.

Using cross-country skis while pulling a heavy sled of supplies, they each battled wind gusts of up to 60 miles per hour, freezing temperatures that dipped below minus-40 degrees, and whiteout conditions – conditions for which they had trained during the months prior.

On the final leg of his journey, O’Brady skied the roughly 80 remaining miles in just over 32 hours. He finished in 54 days, on December 26. Rudd crossed the finish line  two days later.

Completing the feat left him feeling “absolutely elated,” Rudd told “CBS This Morning” Monday. “I was really conscious when I set off on the expedition that nobody had managed to do this before. So you know, success was by no means guaranteed, and to finally make it after 56 days and onto the Ross Ice Shelf and the finish point was an amazing feeling, and huge relief that I managed to do it.” 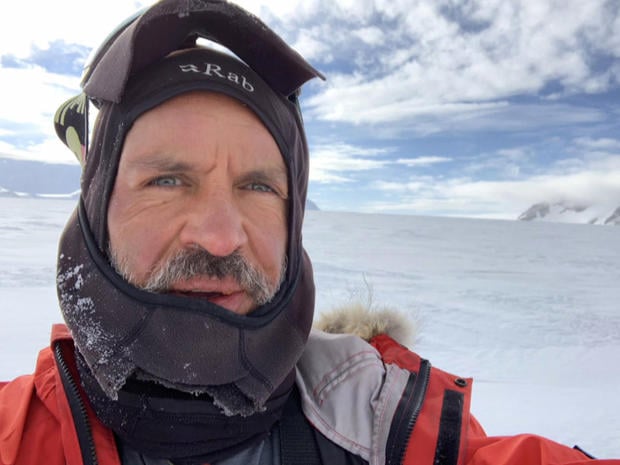 Rudd got through the long weeks of solitude by listening to music and audio books.

Hearing another voice, he said, was helpful, and credited Bruce Springsteen and Bono with getting him across the finish line.

Bruce Springsteen – Born in the U.S.A. by BruceSpringsteenVEVO on YouTube

From U2, Rudd’s pick was the song “Mysterious Ways”:

“I had a lot of audio books, which I found comforting, to have a human voice in my head, talking to me as I’m skiing along, ’cause the wind would be howling, quite lonely.”

Despite the motivational speeches, success was by no means guaranteed. Rudd recounted an incident which could have spelled disaster.

“I got into an area of really deep, soft snow,” he said. “It was a very difficult season this year down in Antarctica with the amount of snowfall and soft snow. And one morning it had been snowing all night, I got up and I could barely move the Polk [his sled] which weighed about 130 kilograms [286 pounds]. That’s what you’re dragging behind you, it’s got everything you need to survive for the two months – food, tents and equipment. Yet I could barely move it because of the deep, soft snow.

“I took half of the stuff out, my tent and sleeping bag, and put it on a surface and marked it with a ski. I went forward a few miles with the food, dropped that off, and In the meantime, the weather really deteriorated and the visibility went down to about five meters, 50 mile-an-hour wind. And I was trying to follow back along my ski tracks to recover my tent and sleeping bag. It was quite difficult. I managed to locate it in the end but it took a while.

“I was conscious that if I didn’t find the gear, instantly I was in a life-threatening situation.” 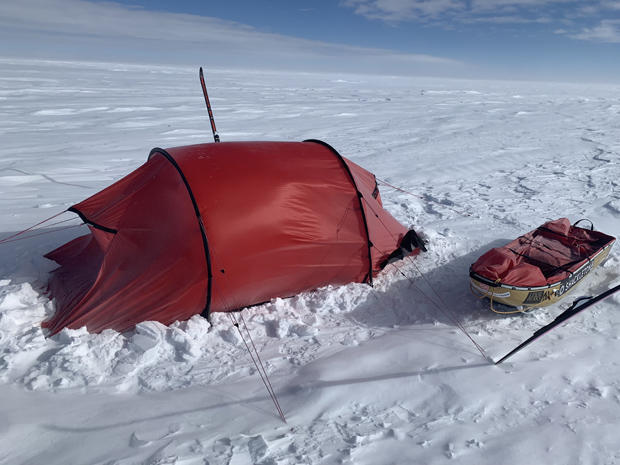 Rudd crossed the Antarctic continent on his solo trek in 56 days. Lou Rudd

“Why didn’t you end it then? There were many times I bet you thought, ‘I can’t make it,'” said co-host Gayle King.

“Yeah. I was really keen [to finish], obviously,” he said. Referring to the British explorer Henry Worsley, who died as a result of his solo attempt, Rudd said, “Henry was friend of mine. I skied to the South Pole with Henry in 2011 and shared a tent with him. I was keen that I was safe and successful – I was fundraising for great charities, great causes. And just the amount of support and people I knew that were backing me, I didn’t want to let everyone down.”

A lesson he had learned from the experience of famed Antarctic explorer Robert Scott, whose party perished in 1912 after reaching the South Pole, when they tried to make their way to a supply depot where food and equipment had been stored. “Had they reached that, they would have survived,” said Rudd. “Somebody calculated that the Scott team, [if] every day they had taken an extra 11 steps, they probably would have made it back to the depot and survived the journey.

“After hearing that, whenever I’m on a polar journey now, I’ll finish skiing for the day and whether it be 8:00, I’ll take 11 more steps. Then I’ll put my tent up. Like a superstition. Once I start, I can’t stop doing it. I have to.”