U-T-C had to tread lightly on enemy turf because U-N-A features a live lion mascot. He actually lives on campus. Talk about your Animal House.

It’s not often on a college campus, you feel like your on a safari. Lurking beyond the tall grass, is the king of the jungle. Say hello to Leo the third.

Reporter: “How big is he weight wise?”

Eubanks: “In the summer time he drops a little bit of weight. You know he gets his hot summer bod, and he is about 475. In the winter time he can get up to about 500. He does think of the entire campus as his own. His territory. He’s our big house cat, and we let him stay.”

Now Leo doesn’t like domestic animals, particularly dogs. And as far as house cats or stray cats go, Eubanks says they never get close to the enclosure. I wonder why. 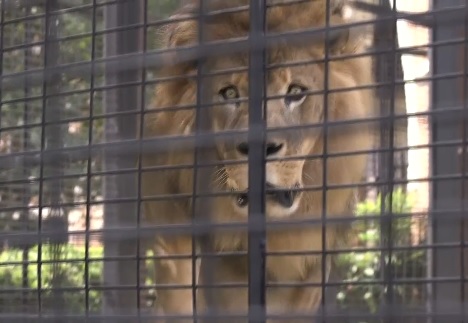 Eubanks: “Leo makes his presence known on campus. There’s no question he’s here. A lot of the classes in the buildings that you see on campus, they can hear him, and they often mark the time when he is roaring. Oh, it must be breakfast time or oh, he must be having a great day because he’s roaring a little bit extra. If he sees certain people that he gets a sense of them, you know he’ll pace, and he’ll keep you in his sights. It’s very intimidating. Often he maybe doesn’t like men in suits so much. We try to get people from being too close to him if they are wearing suits.”

According to UNA sports information, when Leo went to Carson Newman, he was in a cage on the field. Well Carson Newman has a live eagle that flies down on the field before the game. However, the eagle wouldn’t fly until Leo’s cage was covered. Talk about respect for the king. And when you’re the king, you get cool gifts for your birthday, even a football.

Eubanks: “They’re often covered in a solution like it’s meat-based, so that he will want to play with it and interact with it. Those are the ones that get destroyed the fastest.”

Gamedays are special for the Leo too.

Eubanks: “He loves visitors. Any given week he might get about a thousand. During the summer time and the spring when that doesn’t happen, you can tell he’s a little bit less enthusiastic. He’s like uh, just another Saturday. Again, he is apart of the culture of the University of North Alabama.”

Gas Prices Continue to Fall in the Chattanooga Area