A cordoned zone as Swedish police investigate after Sweden’s royal jewels dating from the 17th century were stolen in the Strängnäs cathedral, west of Stockholm, July 31, 2018.

COPENHAGEN, Denmark — Police used helicopters to chase thieves who stole priceless treasures from the Swedish royal regalia displayed in a cathedral over the weekend, including a jeweled crown, but the bandits escaped by motorboat and remain at large.

Two people allegedly stole the two crowns and an orb used by the 17th century King Karl IX and Queen Kristina, which had previously been stored in their tomb, before speeding off via the vast system of lakes west of Stockholm, police said in a statement Wednesday.

Authorities have been using a helicopter and boats to search for the culprits, they added, but no arrests have been made so far. They asked the public for help, while Sweden’s main news agency, TT, said an international inquiry for the artifacts would be made in Interpol’s system. 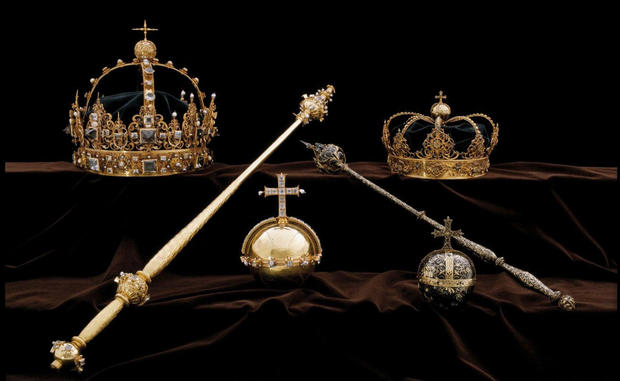 The Swedish Royal Family’s crown jewels from the 17th century are seen in this undated handout photo obtained by Reuters on August 1, 2018.

Maria Ellior of the Swedish police’s National Operations Department told TT that the items are “impossible to sell.” The artifacts are made of gold and enamel and encrusted with beads, crystals and pearls.

Tuesday’s theft took place at the Strangnas Cathedral, 37 miles west of the capital.

The burial site for Sweden’s 17th century royals, the Gothic-style cathedral is built mainly in red bricks, and belongs to the Lutheran church.