Revellers watch the sunrise as they celebrate the pagan festival of Summer Solstice at Stonehenge in Wiltshire, southern England, June 21, 2018.

LONDON — Thousands have watched the sun glint over the horizon at Stonehenge, celebrating the summer solstice at the Neolithic stone circle. The sun rose behind the Heel Stone, which traditionally marks the spot on the horizon for the sunrise, at 4.52 a.m. Thursday (23:52 Eastern on Wednesday).

Crowds cheered and raised mobile phones for images as the rays flooded through the monument and announced the longest day of the year in the Northern Hemisphere.

English Heritage, which cares for historic sites, tweeted that it was the “perfect morning for the #SummerSolstice sunrise at Stonehenge.”

The stone circle in southern England, believed to be 4,500 years old, is a World Heritage site known for its alignment with the movements of the sun. Thousands visit to mark the solstices in summer and winter. 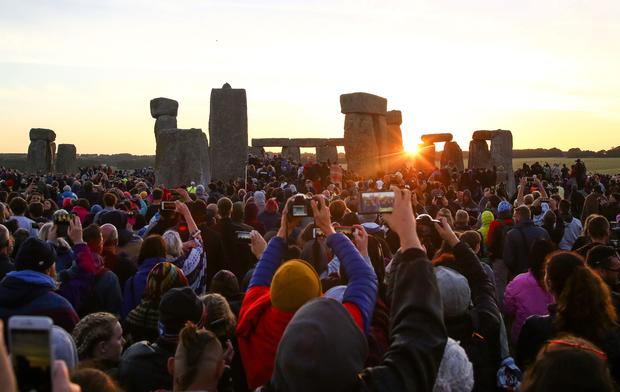 Revellers watch the sunrise as they celebrate the pagan festival of Summer Solstice at Stonehenge in Wiltshire, southern England, June 21, 2018.

The mystery of Stonehenge — how it was built and what it was for — has kept scholars occupied for centuries. As CBS News correspondent Mark Phillips reported in 2015, they were given even more work to try and solve the mystery when more stones were found — lots more.

The stones, it seems, where erected to delineate an area of special significance — some sort of temple or public forum, or both. But the radar also revealed that the stones were then knocked down and covered with an earthen mound. Whatever it was, Phillips said it would be plenty to occupy archaeologists for years to come.

Scientists are pretty sure they know what Stonehenge was for — essentially a large clock that tracks the seasons through the movement of the sun; a useful tool for a stone-age agricultural society.

But the point of the newly discovered stones? Scientists know it’s probably important, but they haven’t a clue why.

“The most important thing that’s been discovered in the last 20 to 30 years anywhere, it was completely unsuspected and it gives us a whole new chapter in the story,” archeologist Nick Snashall told CBS News.