Scientists have identified a new cousin to the Tyrannosaurus rex 21 years after its fossilized bones were discovered in New Mexico. Sterling Nesbitt, a paleontologist at Virginia Tech, made the find when he was just 16. The new dinosaur is called Suskityrannus hazelae, named after the Zuni word for coyote.

This illustration provided by Andrey Atuchin and Virginia Tech in May 2019 shows a Suskityrannus hazelae, foreground, a cousin of the Tyrannosaurus rex. Andrey Atuchin / AP

Nesbitt’s discovery came on land once populated by the Native American tribe. The duck-billed dinosaur dates back 92 million years, about 20 million years before the T. rex stomped the Earth.

The newly discovered cousin — which was three times longer than it was tall — weighed between 45 and 90 pounds, almost nothing compared to the nine-ton king of the dinosaurs. Suskityrannus hazalae isn’t the first or even smallest of the Tyrannosaurus family tree, but Nesbitt said it provides the best example of how this family of modest-sized dinosaurs evolved into the towering T. rex.

Suskityrannus hazalae’s size is what initially threw scientists for a loop back in 1998. It was only until other small tyrannosauroids were discovered that they began re-examining this important find, which Smithsonian Institution paleobiologist Hans Sues believes is “the first really good record of the early tyrannosaurs in North America.”

Though Suskityrannus hazelae may have been Nesbitt’s first major discovery, it certainly hasn’t been his last. Nesbitt and a team of paleontologists unearthed Teleocrater Rhadinus fossils in 2017 on a dig in Tanzania. WTKR reports that, despite walking on four legs like a crocodile, the fossils revealed that the Teleocrater was more closely related to the dinosaurs that eventually gave way to present-day birds. 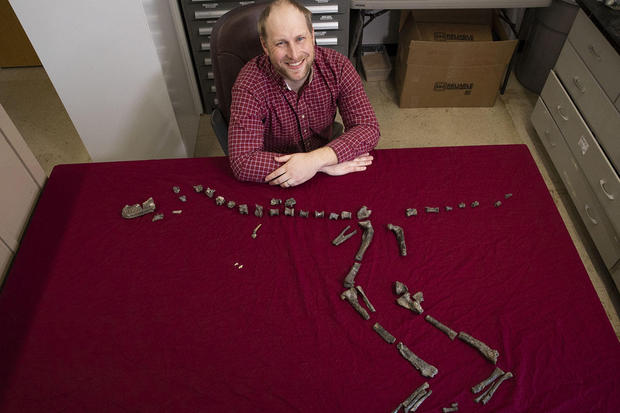 In this March 28, 2019 photo provided by Virginia Tech, Sterling Nesbitt, an Assistant Professor of Geobiology, sits for a photo next to the fossilized bones of Suskityrannus hazelae, a miniature adult Tyrannosaurus dinosaur relative, in Blacksburg, Va. He found some of the original fossils when he was 17 years old. Erin Williams / AP