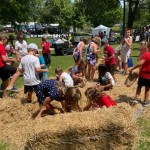 Dade County natives, The Forester Sisters, opened the fair by singing the national anthem. Other activities included a hot dog eating contest, a car show, and over 80 vendors. Nathan Wooten is the Chairman of the 1945 Dade County Fair. He said the fair was started when he realized there was no July4th Celebration in Dade.

Fireworks will conclude the 4th of July event at 10 p.m.