A prosecutor urged jurors Tuesday to focus on a white police officer’s frame of mind when he shot and killed an unarmed black teenager near Pittsburgh last summer.

The now-former officer with the East Pittsburgh police, Michael Rosfeld, fired three bullets into 17-year-old Antwon Rose II on June 19 last year after pulling over an unlicensed taxicab suspected of being used in a drive-by shooting minutes earlier. Rose was a front-seat passenger in the cab and was shot as he fled.

Prosecutors said 30-year-old Rosfeld, who was charged with criminal homicide, gave inconsistent statements about the shooting, including that he thought Rose had a gun.

“What really, really matters is what Michael Rosfeld knew and what he believed and what he thought when he pulled the trigger,” Deputy District Attorney Daniel Fitzsimmons told jurors in his opening statement.

Defense attorney Patrick Thomassey said Rosfeld did not intend to shoot anyone that day and did nothing wrong in his fatal encounter with Rose.

“You think Michael Rosfeld got up on the 19th of June and thought he was going to shoot someone? Of course not,” he said.

A jury of six men and six women, including three African-Americans, was selected across the state in Harrisburg last week and will be sequestered in a Pittsburgh hotel for the duration of the trial, expected to take a week or more.

The families of Rose and Rosfeld were in the courtroom Tuesday as the trial got underway. Outside court, a memorial display was set up for Rose with flowers and his portrait.

“Antwon’s family is here seeking the justice they so deserve and to assure that the light of Antwon’s memory shines forever,” said a statement issued Tuesday by the family’s lawyer, Fred Rabner, who represents them in a wrongful death suit against Rosfeld, the borough and its mayor and police chief. The family statement called Rosfeld “hair-triggered” and “overly aggressive,” adding that his gun had “left an irreparable hole in their collective souls.”

Rose had been riding in the front seat of an unlicensed taxicab when the backseat passenger rolled down a window and shot at two men on the streets of North Braddock. The shooter was Zaijuan Hester, 18, of Swissvale, who pleaded guilty Friday to aggravated assault and firearms violations for the shooting, which wounded a man in the abdomen. Hester told a judge that he, not Rose, did the shooting. A judge ruled Monday that jurors will hear evidence of that shooting but likely will not hear about a robbery that occurred several hours earlier. 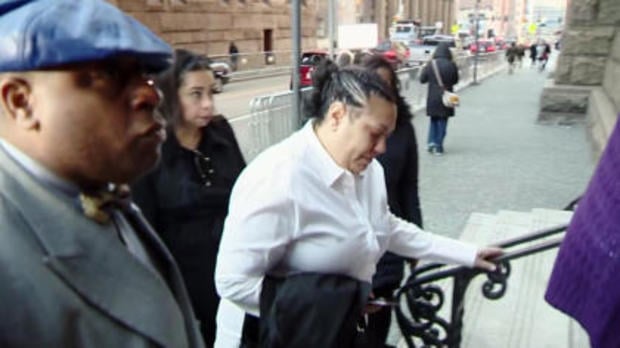 Police Sgt. Brian Hodges of North Braddock testified Tuesday that he and Rosfeld responded to the drive-by, and that Rosfeld went in search of the car spotted leaving the scene. A short time later, Rosfeld pulled it over. While Rose ran from the vehicle, Rosfeld shot him three times — in the right side of his face, in his elbow and in his back — a bullet tearing through his heart and lung.

There were audible gasps and tears in the courtroom Tuesday as an Allegheny County deputy medical examiner took the stand and described the bullet wounds Rose suffered as the prosecution showed graphic photos, reports CBS Pittsburgh.

In its opening, the defense asserted that Rose was complicit in the drive-by shooting, identifying the target to the gunman, Hester. Rose had an empty ammunition clip in his pants when he was killed, and two handguns were recovered from inside the vehicle.

The prosecutor urged jurors to focus on what Rosfeld knew about any of that when he shot Rose.

Rosfeld initially told investigators that he saw something in Rose’s hand that Rosfeld thought was a gun, according to a police affidavit.

“This observation caused him to step from behind the cover of his car door to acquire a better view,” the affidavit said. “He then fired his weapon.”

Investigators have said Rosfeld subsequently told the detectives he did not see a gun when the passenger ran. 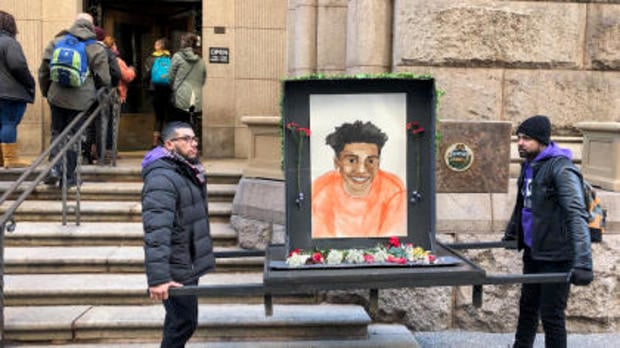 “When confronted with this inconsistency, Rosfeld stated he saw something in the passenger’s hand but was not sure what it was,” police wrote. “In addition, Officer Rosfeld stated that he was not certain if the individual who had his arm pointed at him was still pointing at him when he fired the shots.”

Prosecutors reportedly emphasized that Rose wasn’t a threat because he was running away as he was shot. But defense attorneys argued Rosfeld had reason to believe Rose was armed and dangerous.

Rosfeld’s attorney Patrick Thomassey told the court the shooting happened outside of a senior living facility, reports CBS Pittsburgh. He said Rose and the other young man he was with “could have gone into there and taken someone hostage” and “turned it into a SWAT situation.” He said Rosfeld was just “protecting the community.”

“You have to make, as a police officer, a split second decision,” he said.

Supporters of Rose’s family gasped and exclaimed at various points during the defense opening statement, leading deputies to call for order, reports the Pittsburgh Post-Gazette.