CHATTANOOGA, Tenn. (WDEF)- There is a tragic update to the two vehicle crash that occurred on the 6200 block of Shallowford Road at the intersection of Shepard and Noah Reid Roads.

Chattanooga Police have confirmed that two passengers, one in each car; have died because of the injuries they sustained in the crash. They were pronounced dead on the scene.

The incident occurred when a black BMW sedan ran a red light at the intersection of Shallowford/Noah Reid/ Shepherd Roads at a high rate of speed and crashed into the passenger side of a gold Buick SUV who was turning left. The driver of the black BMW, 20 year old Tyrell Williams, has been charged with two counts of vehicular homicide, two counts of vehicular homicide by intoxication, aggravated assault, possession of a stolen firearm, and other traffic charges.

Williams is currently under observation at a local hospital. The driver of the Buick SUV is fighting life-threatening injuries at this time. 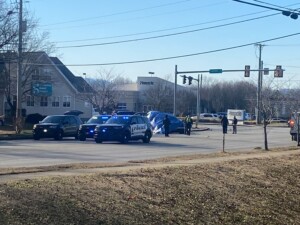 Police responding to a violent crash on the 6200 block of Shallowford Road.