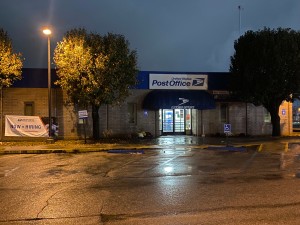 CHATTANOOGA, Tenn. (WDEF)- A shooting at a Chattanooga post office and a crash at a Hixson nail salon have left two dead Sunday evening.

Chattanooga Police say they recieved a call around 10:30 p.m. Sunday of shots fired at the post office on the 6000 block of Shallowford Road. That’s near Shallowford Road’s interchange with Highway 153.

Afterwards, they recieved another call of a car that had crashed through a nail salon in Hixson. This incident occurred at the Apple Nail Bar on Highway 153 near Northgate Mall. These two scenes according to police are connected and have left two dead.

Early Monday Morning, Chattanooga Police Chief Celeste Murphy said that, “Right now, what I can confirm for you is that there are two deceased from gunshot wound injuries, and right now that situation is contained and there is no further from the public.”

The identity of any suspects or victims have not yet been released. More information is likely to come later today.