Washington — The Trump administration on Thursday began deporting migrants who sought refuge in the U.S. to Guatemala, the first step in the implementation of a controversial agreement with the Guatemalan government aimed at requiring asylum-seekers from other countries to request protection in the Central American nation.

The first asylum-seeker deported by the U.S. under the bilateral accord, a man from Honduras, arrived in Guatemala City on Thursday morning, the country’s foreign minister said. More migrants from neighboring Honduras and El Salvador are expected to be rerouted to Guatemala in the coming days after the U.S. government deems them ineligible for asylum in the U.S. and instructs them to seek protection there.

Enrique Antonio Degenhart Asturias, the foreign minister, said Thursday marked the beginning of the “operative stage” of the accord with the U.S., telling reporters in the capital that his government is expecting more arrivals of Honduran and Salvadoran migrants deported by the U.S. next week. He said Guatemala will take steps to gradually increase the number of foreign asylum-seekers it will receive.

The agreement, one of three asylum deals the Trump administration has brokered with all countries in Central America’s Northern Triangle, has evoked withering criticism from immigrant advocates and humanitarian groups. They believe the U.S. will place vulnerable asylum-seekers in harm’s way by requiring them to seek refuge through the fledgling asylum system of a country which has seen the exodus of hundreds of thousands of its own citizens in the past months.

Guatemala has experienced moderate economic growth since the end of a bloody civil war in the 1990s, but it continues to grapple with high crime, drug trafficking, political instability and widespread poverty, especially among its large indigenous communities in the Western highlands of the country. Only about 262 migrants sought refuge in Guatemala in 2018, according to the United Nations.

In a rare rebuke of U.S. asylum policy, the United Nations refugee agency — which receives U.S. funds — raised “serious concerns” about U.S.-Guatemala agreement. “It is an approach at variance with international law that could result in the transfer of highly vulnerable individuals to countries where they may face life-threatening dangers,” the agency said in a statement.

The Trump administration, however, has portrayed the bilateral agreements with Guatemala, El Salvador and Honduras as tools designed to ensure that nations in the region “share the distribution” of asylum claims. Officials believe the deals will curb what they call “forum shopping,” the practice of seeking asylum in America, rather than in the countries that migrants travel through en route to the U.S.-Mexico border.

“These agreements will build a robust asylum capacity in the entire region and allow migrants to seek humanitarian protections as close to home as possible,” Acting DHS Secretary Chad Wolf said Wednesday in the Texas border city of El Paso. 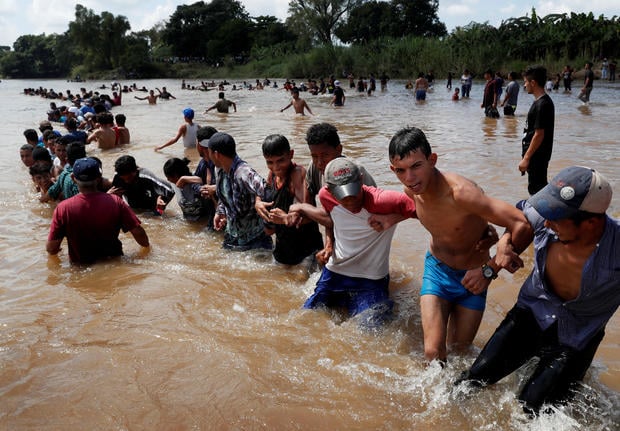 Migrants make a human chain to pull people from the river between Guatemala to Mexico in Ciudad Hidalgo on October 29, 2018. Leah Millis / REUTERS

Last week, the administration published a joint rule by the Department of Homeland Security (DHS) and the Justice Department to enforce the agreement brokered with Guatemala in July, as well as ones signed with the governments of Honduras and El Salvador in September that have yet to be implemented. The administration, however, has revealed little publicly about the implementation of the accord with Guatemala this week.

CBS News has learned that some Central American consulates near the U.S.-Mexico border, which typically provide services to their citizens who make the often perilous trek to the U.S., have been kept in the dark about the implementation of the U.S.-Guatemala agreement.

Some of the operative details of the Trump administration’s efforts to implement the accord have only been detailed in internal USCIS guidance reported by BuzzFeed News and Reuters. According to the guidance, Customs and Border Protection (CBP) officers will determine whether migrants who claimed fear of persecution — whether at a port of entry or after crossing the southern border illegally — will be subject to the agreement with Guatemala and face deportation there.

USCIS asylum officers would then review those assessments by CBP and determine whether the migrants should be removed to Guatemala or granted an exemption from the agreement in the “public interest.” Migrants can also affirmatively state that they are afraid of going to Guatemala, but must prove they are “more likely than not” to face persecution there — a heightened standard.

Asylum-seekers will not have access to attorneys during these screenings, according to the guidance.

When asylum officers determine that the migrants should be subject to the agreement, immigrant judges will make the final decision as to whether they should be sent to Guatemala. All the immigration courts along the U.S.-Mexico border — which are overseen by the Justice Department — are expected to play their part in the agreement in the coming weeks.

Degenhart Asturias, the Guatemalan foreign minister, said on Thursday that those deported to Guatemala under the agreement will have two options: seek refuge there through the Guatemalan immigration institute or request help in getting back to their home countries.

The latter option was the one taken by the Honduran asylum-seeker on Thursday morning. Degenhart Asturias said the migrant was referred to the International Organization for Migration (IOM), an intergovernmental group with a mission to help displaced people around the world. The foreign minister said the group will be the one charged with returning asylum-seekers deported by the U.S. to Guatemala back to their homes countries. 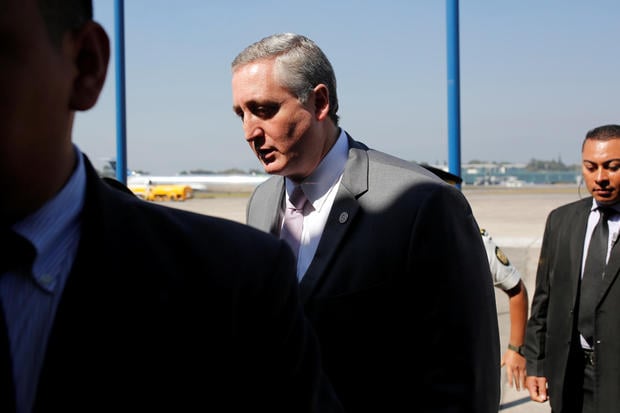 Guatemalan Interior Minister Enrique Degenhart is seen after the arrival of a flight of migrants deported from U.S., at La Aurora International airport in Guatemala City, Guatemala, on November 21, 2019. LUIS ECHEVERRIA / REUTERS

Asked about concerns of the deal infringing on the rights of asylum-seekers, Degenhart Asturias said the agreement is designed to dismantle smuggling organizations who advertise the dangerous journey to the U.S. to the region’s poor. “At no time have we sought to attack or harm the rights of migrants,” he added.

Pointing to the continued decline in apprehensions of migrants along the U.S.-Mexico border over the past five months, Degenhart Asturias said the joint efforts between the Trump administration and the Northern Triangle have already proved fruitful. In addition to deals with El Salvador, Guatemala and Honduras, the U.S. has convinced the Mexican government to bolster its immigrant enforcement in recent months and accept more than 60,000 migrants who have been required by the U.S. to stay in Mexico for the duration of their immigration proceedings.