UNDATED (AP) – Lawyers have revealed a potential defense for an Alabama prisoner who walked out of jail with a corrections official, prompting an intensive manhunt. 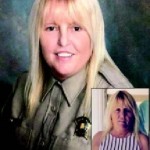 Attorneys for Casey White argue he was in the “care and custody” of jail official Vicky White the entire time authorities were searching for them. And they note Casey White was arrested after the woman took her own life last month in Evansville, Indiana.

Authorities say it appears the two had a “jailhouse romance.”

The defense claims came in a request to change the location of a case in which Casey White is awaiting trial on a capital murder charge.