Update: Woman Turns Herself in after Hit and Run 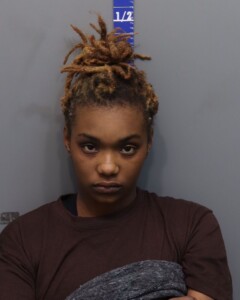 CHATTANOOGA, Tenn. (WDEF) — A woman who struck a bicyclist with her vehicle on Monday has turned herself in, according to an affidavit from the Hamilton County Sheriff’s Office.

Shortly before 3 p.m. on Monday, Anasia McKeldin, 20, hit a juvenile on a bicycle with her vehicle. The incident occurred at an intersection of Market St. and 20th St.

McKeldin told police that she had a green light when the bicyclist came out in front of her.

The juvenile on the bicycle was Josiah Houston, documents reveal.

Police say Houston was not using the crosswalk when he crossed Market Street on his bicycle. McKeldin said she slammed on her brakes but could not stop soon enough to avoid hitting Houston.

McKeldin told officers that she was frightened and fled the scene.

She later turned herself in. She was arrested and taken to Silverdale Detention Center.

Police said McKeldin turned herself in the same day, around 6 p.m.

Houston was taken to the hospital with a broken shin bone and other minor injuries.

Police say Houston was not wearing a helmet when he was hit.

The Hamilton County Sheriff’s Office now says McKeldin is being charged with leaving the scene of an accident with injury, no proof of insurance and driving without a license.

We previously reported on this hit and run that took place Downtown Chattanooga.