Utah man begs for help from inside Venezuelan prison

CARACAS, Venezuela — A Utah man imprisoned in Venezuela for two years without a trial is making an emotional plea for Americans’ help getting out of a Caracas jail, saying Wednesday in a clandestinely shot video that his life was threatened during a riot in the country’s most-notorious prison. In two 20-second videos shot on a cell phone, a visibly distraught Joshua Holt suggested that his patience is running out with the U.S. government, which has made his release a top priority in its dealings with Venezuela’s socialist government.

“I’ve been begging my government for two years. They say they’re doing things but I’m still here,” said Holt in the video posted on his Facebook page.

The 26-year-old traveled to Venezuela in 2016 to marry a fellow Mormon he met on the internet. Shortly afterward, the couple was arrested at her family’s apartment in a Caracas public housing project after police said they found him stockpiling an assault weapon and grenades.

“Please my fellow Americans don’t allow me to continue suffering in Venezuela,” Holt said in a written message, also posted on his Facebook page. “I am not a political pawn I am a human being a child of God and I just want to live happy with my wife and children. I have NEVER done anything wrong in my life. Please help me!”

His first-ever video message from jail came amid what the U.S. government described as a “riot” Wednesday by fellow inmates, including some of President Nicolas Maduro’s top opponents. The disturbance, the extent of which was not known, came as Venezuelans are on edge days before Sunday’s presidential election, which Maduro is widely expected to win despite a crushing economic crisis marked by widespread shortages and hyperinflation.

Trucks of Venezuela’s domestic intelligence agency SEBIN leave the Helicoide prison in Caracas after reports of a riot inside, May 16, 2018.

In a third video circulating on social media, the American is seen standing calmly next to three well-known opposition activists wearing the same black T-shirt he had on earlier Wednesday.

“I’m here to show you that I am not being kidnapped,” Holt says in the video, which he didn’t post to his Facebook account. “The only people that are kidnapping me is the government of Venezuela.”

Chief Prosecutor Tarek William Saab sent a commission to the El Helicoide prison to speak with a representative of the inmates. While he didn’t provide details about the disturbance, or what sparked it, he said on Twitter that the delegates offered to coordinate with prison and judicial authorities to address the demands of inmates at El Helicoide, which is the headquarters of the feared Sebin intelligence police.

The inmates were demanding due process rights like speedier hearings and the immediate freedom for prisoners who have received a judge’s release order. Foro Penal, a lawyer cooperative, said 20 of the 54 detainees in El Helicoide that the opposition deems to be political prisoners have been granted parole, but are having their release blocked by the government for no stated reasons.

Later, socialist party leader Diosdado Cabello accused the inmates of staging the revolt to spread intrigue ahead of the election.

Cabello also broke a longstanding silence from Venezuelan officials’ about Holt’s imprisonment to accuse the American of being a spy. “He’s the U.S.’s spy chief in Latin America and he’s jailed here in Venezuela,” Cabello said on his weekly TV program.

Holt’s trial on weapons charges had been scheduled to start Tuesday but Holt and his wife, Thamara Caleno, were never taken to the courthouse by their jailers.

“The Sebin has told me that as long as my government continues attacking this government and as long as Marco Rubio continues talking about me the longer that they will never let me go,” Holt said in a written message, referring to the Republican senator from Florida who has accused Maduro of keeping Holt as a “hostage” to extract concessions from the U.S.

The Trump administration has warned that it could put crippling oil sanctions on Venezuela if Maduro goes ahead with what the U.S. and others consider a sham presidential election Sunday. Several of Maduro’s top opponents are barred from running. 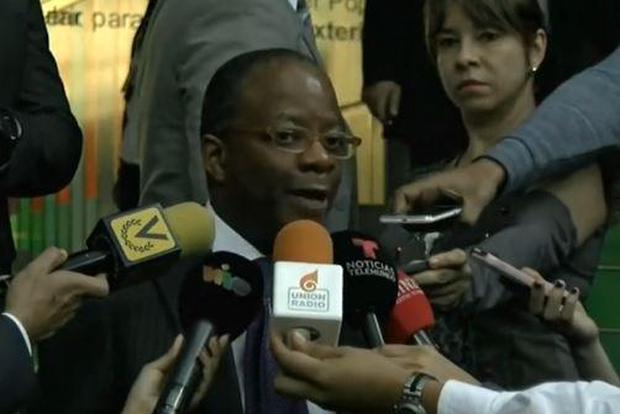 Todd Robinson, the top American diplomat in Venezuela, speaks to reporters in Caracas, May 16, 2018.

Amid statements of concern by Utah’s congressional delegation, Todd Robinson, the top American diplomat in Venezuela, went to the foreign ministry to seek information about Holt. But he left shortly after nightfall with no answers, saying he was unable to meet with the foreign minister and other officials, including Maduro, either didn’t take the embassy’s calls or claimed not to have any knowledge about the case.

Cabello denied Robinson had been snubbed, accusing him of staging a media show.

“We are concerned about the riot at El Helicoide,” Robinson said.

“Joshua Holt and other U.S. citizens are in danger,” he added. “The government of Venezuela is directly responsible for their safety and will be held responsible if anything happens to them. We renew our call for the government to release Joshua Holt on humanitarian grounds.”