Caracas, Venezuela (CNN) – Venezuelan officials have confiscated nearly 5 million toys from a toy distributor, accusing the company of planning to sell them at inflated prices during the Christmas season.

Critics say the consumer protection agency, which targeted the toy warehouse this week, has become “the Grinch that stole Christmas” because many families won’t be able to buy the confiscated toys for the holiday.
Agency head William Contreras disputed that, saying executives at toy distributor Kreisel-Venezuela, the largest of its kind in the country, “don’t care about our children’s right to have a merry Christmas.” 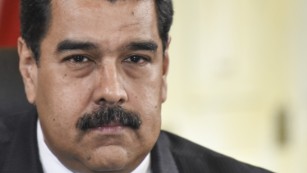 Venezuelan President Nicolás Maduro is being called a Grinch after the government confiscated millions of toys over alleged price gouging.
He told reporters, “They say we’re stealing the toys from this company, but the company committed fraud against our country.”
The government said the 4.8 million toys will now be made available to families in impoverished neighborhoods at lower-than-market prices.

‘Worse than the Grinch’

According to authorities, the operation began Thursday, but law enforcement officials were still at the warehouse Saturday.
Officials also detained at least two people as part of the operation.
“Now what?,” a Venezuelan woman asked on Twitter, “is (President) Nicolás Maduro the modern Grinch?”
Another Twitter user told CNN that the Venezuelan government is “worse than the Grinch.”
It’s not clear what effect, if any, the confiscation of the millions of toys will have on the toy market in Venezuela just two weeks before Christmas.
Government officials said some of the toys were bought by Kriesel as far back as 2008 and were being kept in storage to be sold for a much higher margin of profit, as high at 25,000%, according to government figures.
The consumer protection agency has asked the Venezuelan attorney general’s office to prohibit Kreisel executives from leaving the country as they conduct their investigation.
CNN has not been able to reach company executives for comment.
Under Venezuela’s socialist government, toys are included on the list of regulated products that have to be sold at government-approved prices.

Venezuelan Chamber of Commerce President Francisco Fernández told CNN the government is “acting in an irresponsible way,” discouraging job creation and endangering private property.
“This was plundering of inventory. The government didn’t even respect the company’s right of due process,” Fernández said.
Venezuela is experiencing a deep economic crisis that has seen inflation skyrocketing to a whopping 500% this year, according to the International Monetary Fund. The IMF says it may reach 1,660% in 2017.
In November alone, the bolivar, the Venezuelan currency, lost more than half of its value. Shortages of foods staples like rice, flour and chicken are common place and hospitals are critically short on medicines and medical supplies.
The central bank plans to introduce new bills this month worth as much as 20,000 bolivars — 200 times the largest note currently in circulation — after the hyperinflation turned its currency into worthless pieces of paper.
The largest current note is the 100 bolivar, which is officially worth 15 U.S. cents, or just 2 cents based on widely-used unofficial exchange rates.