The alleged gunman was captured and beaten by a crowd of people at the bar, Bautista said. He said police were waiting until the man undergoes treatment for his injuries before questioning him.

Police confirmed to CBS News the man in custody is Eddy Feliz Garcia and said they’re looking for a second suspect.

In surveillance video, a motorcyclist can be seen approaching the group from behind, and shooting Ortiz in the back, CBS News correspondent David Begnaud reports. Police say it was “nearly point-blank range.”

Surveillance video shows David Ortiz being shot inside a bar in the Dominican Republic. CBS News

Ortiz was taken to a medical facility where he underwent surgery and his condition was stable, Bautista said.    Ortiz’s father, Leo, speaking to reporters outside the clinic, said his son was out of danger and that the bullet had not hit any major organ. He said he had no idea why someone would have shot his son. 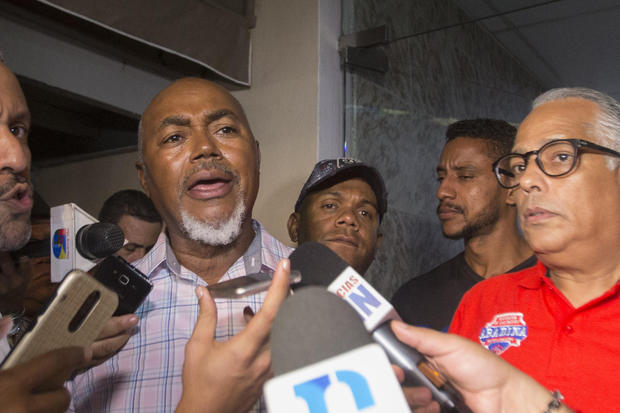 Leo Ortiz, father of former Boston Red Sox star David (Big Papi) Ortiz, talks to the press outside the clinic where his son is being treated after being shot while in a club in Santo Domingo on June 9, 2019 Erika Santelices / AFP/Getty Images

“He is out of surgery and stable; he is resting,” Leo Ortiz said. ” ‘Big Papi’ (David Ortiz’s nickname) will be around for a long time.”

National police spokesperson Frank Felix Duran told CBS News Ortiz or urban singer Secreto, who was with him, may have been the target of a hit job. “We’re not ruling out any scenario. What we can rule out is that this wasn’t a robbery,” he said.

Investigators are trying to determine whether Ortiz was the intended target, Bautista said.  Duran said the gunman fired without saying a word. 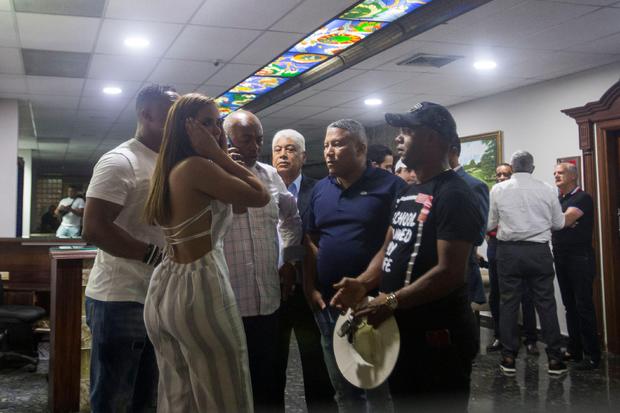 Family and friends of former Boston Red Sox slugger David Ortiz wait in the clinic where he and Dominican television presenter Joel Lopez were being treated after being shot while in a bar in the city of Santo Domingo on June 9, 2019.  Erika Santelices / AFP/Getty Images

Bautista said Jhoel López, a Dominican TV host who was also with Ortiz, was also hit, apparently by the same bullet. López was shot in the leg and his wounds were not life-threatening, said his wife, Liza Blanco, who is also a TV host.

The Red Sox said they “have offered David’s family all available resources to aid in his recovery and will continue to keep (him) in our hearts.”

Six years ago, David Ortiz’s spirit and resolve helped us all begin to heal from the Boston Marathon bombing. Today, I want to join many others in wishing him a speedy recovery of his own. Get well soon, Papi. pic.twitter.com/9orpBgnVI5

Fellow former baseball great Alex Rodriguez took to Twitter when he heard what had happened to Ortiz:

Anxiously waiting for more news. In the meantime, only prayers for @davidortiz, Tiffany and their family. https://t.co/IlE2v4g38t

So did former superstar pitcher Pedro Martinez, among many others:

I’m at peace knowing you out of danger; you a strong man Compai, can’t wait to hear your voice. My thoughts and prayers are with you, see you soon.
Me siento tranquilo de saber que estás fuera de peligro, usted es fuerte Compai, ya quiero oírle la voz. Orando, nos vemos pronto pic.twitter.com/jdSnNsM7eI

The Dial Bar and Lounge is located in eastern Santo Domingo on Venezuela Avenue, a bustling nightlife district packed with dance clubs and pricey bars that Ortiz is known to frequent. Ortiz, who lives at least part of the year in the Dominican, is often seen getting his cars washed and hanging out with friends including other baseball players, artists and entertainers.

The 43-year-old Ortiz hit 541 homers in 20 major league seasons, including 14 with the Red Sox. He helped lead Boston to three World Series titles and retired after the 2016 season. He was a 10-time All-Star and the World Series MVP in 2013.