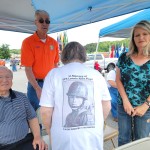 The two day event began Friday in front of the Hixson Walmart. In attendance Saturday was former Tennessee State Representative Richard Floyd. He was there with his sister to honor the memory of his brother Lonnie Floyd, who died saving a fellow solider during the Vietnam War.

Floyd said no longer how long it’s been the hurt is the same. “My brother loved the military. He had already enlisted to stay over there. He were so proud of him. So, all these years we still, on Memorial Day it’s just as fresh. The hurts still just as raw as it was the fourteenth of January 1967,” Floyd said.

The Chattanooga Vietnam Veterans of America Chapter is the second largest Chapter in the nation.