CHATTANOOGA (WDEF) – On a night with many political suspicions confirmed by the voters of Hamilton County, we did see one upset and one amazing close race.

But the big story is the Wamp family in Hamilton County politics.

Both the son and daughter of former Congressman Zach Wamp will now lead important branches of local government.

And both did it convincingly.

History shows that once you win this job, you keep it for awhile. His predecessors had long reigns.

The mayor (formerly County Executive) is the top financial officer of Hamilton County. 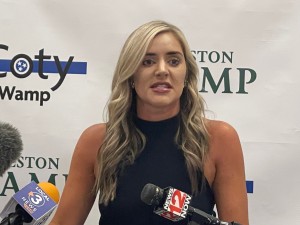 Republican Coty Wamp defeated John Allen Brooks by a similar margin. (She did get more votes than her brother for the Thanksgiving dinner bragging rights).

After the results came in, Wamp talked about working with her brother in government, and why it probably won’t be as complicated as many people think.

The upset of election day was for Hamilton County Sessions Court Judge.

She will finish out the term of Anthony Byrd.