People stop to admire the blooming cherry blossoms at the Tidal Basin in Washington, D.C. in March 2016 Mark Wilson/Getty Images

Washington D.C.’s cherry blossom season has gone well this year, thanks to warm weather that has coincided perfectly with the annual blooming that draws hundreds of thousands of visitors each spring.

But officials are claiming that Washington’s iconic trees are under a looming threat that requires emergency action.

Decades of wear and tear from foot traffic, combined with rising sea levels and a deteriorating sea wall have created a chronic flooding problem in the Tidal Basin. The 107-acre man-made reservoir borders the Jefferson Memorial and is home to the highest concentration of cherry blossom trees.

“The Tidal Basin is at a pivotal moment,” said Jeff Reinbold, acting superintendent for the National Mall and Memorial Parks division of the National Park Service. “The area was never designed for the kind of use it sees today.”

The National Park Service, along with the Trust for the National Mall and the National Trust for Historic Preservation, is undertaking a campaign to save the Tidal Basin. In addition to rebuilding the battered sea wall and addressing the flooding problem, the groups want to improve walkways and update security systems. 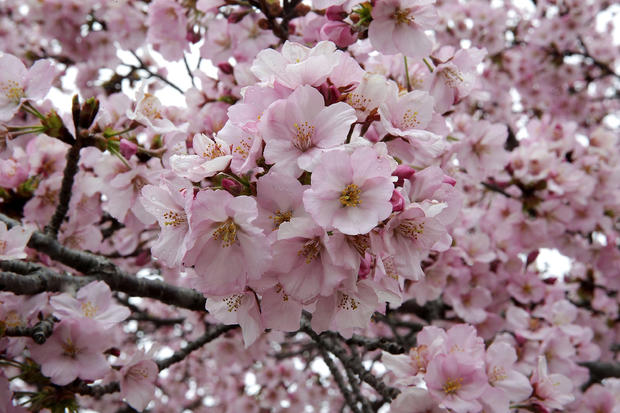 Twice a day at high tide, a large stretch of sidewalk next to the Jefferson Memorial is submerged by the rising waters. During the heavy rains that routinely occur in Washington, the floodwaters completely overflow the sea wall in multiple locations and soak the tree roots.

It’s more than just an inconvenience.

Teresa Durkin, senior project director of the Trust for the National Mall, said the higher silt concentration of the floodwaters is shortening the life span of the hundreds of cherry blossom trees that ring the basin.

“The infrastructure is breaking down because of the daily flooding. The trees are being inundated with brackish water,” she said. “People do love these trees and we keep having to replace them.”

Early estimates are that the rehabilitation project would require as much as $500 million, with organizers seeking a combination of government money and private donations.

The organizations are partnering with American Express, which is funding the creation of the Tidal Basin Ideas Lab and inviting architectural and landscape design firms to submit proposals for replacing the sea wall and refurbishing and modernizing the entire area.

Sean Kennealy, the chief of professional services for the National Mall and Memorial Parks division, said the original 1880s design of the Tidal Basin simply wasn’t equipped to handle the kinds of crowds and traffic the area now receives. That traffic has only increased as more monuments have been added to the Tidal Basin area over the years: a memorial to Franklin Roosevelt opened in 1997, and the Martin Luther King Jr. memorial was inaugurated in 2011.

Even without the worsening flooding problem, Kenneally said the entire network of sidewalks and pathways needs to be expanded to accommodate the modern visitor numbers.

“People have started making their own paths through the grass because the walkways are either not wide enough or underwater,” Kennealy said. “The trees just aren’t being protected the way they should be.”

For now, the Tidal Basin’s structural issues remain fairly low key. Janice Contreras, a tourist from Arizona visiting the Tidal Basin on Wednesday, said it didn’t really affect her experience. But it’s hard not to notice a large stretch of sidewalk seemingly being reclaimed by the advancing waters.

“Does that really happen twice a day,” she asked. “It doesn’t really bother me, but there’s no way that’s good for the trees, right?”