The Fire department was called out to Workman Road to find the homeless in the woods along Chattanooga Creek in the flood plain between Alton Park and Rossville around 5 PM.

By the time they got there, the rising waters had turned the area into an island.

They found tents at the encampment, but no humans.

Instead, they located several dogs.

One of them was rescued while other dogs in the area were secured. 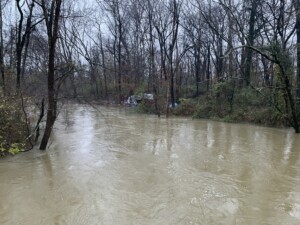