RS3 puts out fire that defeats firemen with conventional hose

Whitfield County Fire Chief Ed O’Brien (left) and other firefighters watch as Patrick Boccio with Emergency Medical Services uses a remote control to operate the RS3 robot to put out the county’s burn car at its training center. The robot can pump out up to 10 times the amount of water provided by standard hose lines to extinguish fires more quickly without putting the lives of human firefighters in danger.

The County Fire service put a robotic pump to the test.

Their test was a fire start in their metal burn car that was fed by a gas line.

Firefighters have never been able to put the fire out using their normal hoses for hours on the flame.

But the RS3 robot snuffed the flames in a matter of seconds.

It pumps out a stream up to ten times stronger than standard hose lines.

That’s 2,500 gallons of water per minute hooked to a three-inch hose.

“That put out so much more water than our hand lines do,” Assistant Chief Randy Kittle said, “and it put the fire right out. We’ll go up with a hand line during training, and it’ll burn for an hour and we’ll finally have to close the gas valve to put out the fire.”

They also tested how mobile the robot pump is by driving it around buildings without kinking the hose.

But the biggest challenge for the RS3 is paying for it.

Whitfield fire officials don’t think any one department could afford it, but that several could go together to purchase one.

“This would have worked great on that building fire we had several months ago – over off Walnut Avenue, the large carpet building that we deemed unsafe to go inside. We were there for days still putting fires out. We could have run this robot in there, moved it around where we needed to, and put the water where we needed to.” 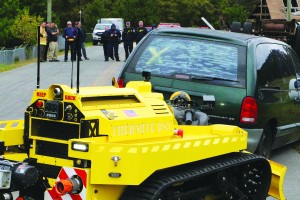