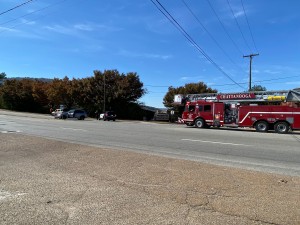 Officials respond to a two vehicle crash at the intersection of South Broad and 28th Streets.

CHATTANOOGA, Tenn. (WDEF)- A wreck on South Broad caused major traffic backups this afternoon. Two vehicles collided at the intersection of South Broad and 28th Streets in the southbound lanes around 1:45 PM. This forced traffic to divert onto Alton Park Boulevard and 33rd Street with delays. According to Chattanooga Police, thankfully there were no injuries and E-M-S checked everyone out on the scene.