Rescue teams continue to search for victims at the Lake Toba ferry port in the province of North Sumatra, Indonesia, on June 19, 2018, after a boat overturned and rescue operations were halted due to a bad weather.

JAKARTA, Indonesia — Dozens of people are missing from a ferry that sank on Indonesia’s Lake Toba, casting a tragic pall over holidays marking the end of the Muslim holy month. Cellphone video released Tuesday by the National Disaster Mitigation Agency shows the crew of another ferry attempting to rescue people struggling in the waters shortly after the sinking Monday evening but being hampered by bad weather and rough waters.

Local police chief Marudut Liberty Panjaitan said 18 people have been rescued and one death confirmed. So far 49 people are confirmed missing, he said, based on reports from relatives.

Initial estimates were that 80 people were on board but there was no passenger manifest and the number may range from 70 to 130, disaster agency spokesman Sutopo Purwo Nugroho said on Twitter. 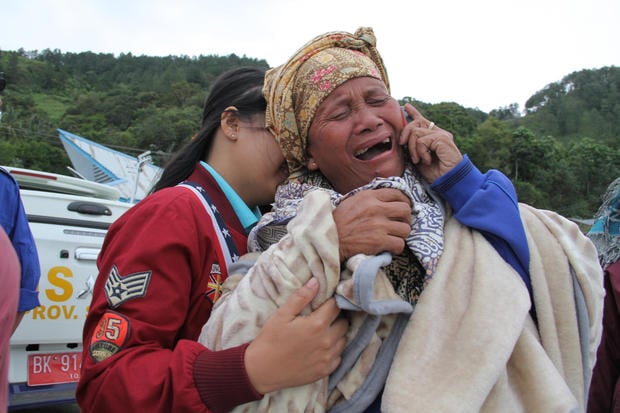 A woman cries as she finds out her family are listed as missing, at the Lake Toba ferry port in the province of North Sumatra, Indonesia, June 19, 2018, after a boat capsized the day before.

Nugroho said the boat sank at about 5:30 p.m. as it sailed from the mainland to an island.

A survivor identified by Indonesian television as Juwita Sumbayak said the vessel was rocked by high waves and was hit a by a wooden boat before suddenly sinking.

“I was desperate, I was scared to death. I’m afraid my family is dead,” she said, weeping.

The 440-square mile Lake Toba, formed out of an ancient super volcano, is a popular sightseeing destination on the island of Sumatra. Tens of millions of Indonesians return to their hometowns and take holidays at the end of Ramadan. 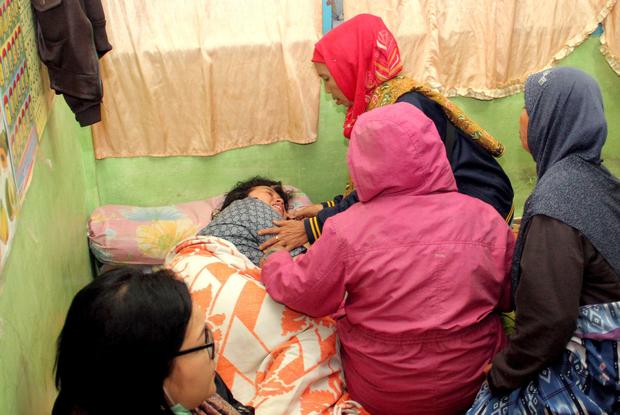 A survivor is surrounded by family members after she was rescued after a boat overturned on Lake Toba in the province of North Sumatra, Indonesia, June 18, 2018.

Maher Tamba, an official with the local disaster agency, said at least half a dozen vessels searched for survivors since Monday night. Bad weather and high waves hampered the search, he said.

Ferry tragedies are common in Indonesia, an archipelago of more than 17,000 islands, with weak enforcement of safety regulations often to blame.