Two men were killed Sunday morning when a vehicle crashed into the second floor of an unoccupied New Jersey building. Firefighters and other responders pushed out bricks to widen an opening left by an out-of-control sports car that crashed through the Toms River building’s second-story exterior wall, landing upside down, CBS New York reports.

“How? That’s all I kept saying is how. How did this happen,” resident Nancy Coakley told CBS N.Y.

Killed in the crash were two men, 23-year-old Daniel Foley and 22-year-old Braden DeMartin, both of Toms River.

Police said DeMartin was driving northbound on Hooper Avenue at an extremely high rate of speed with Foley in the passenger seat.

The skid marks show where the Porsche Boxster crossed over the southbound lanes, bouncing as it hit a ditch leading up to the two-story building at 1466 Hooper, where signs out front advertise a real estate firm and a counseling services company, among others.

“The skid marks are really close together. Then over here they’re wider, so must’ve been on its side. It hit the curb, started tumbling, then hit the gully and launched him up into the inside,” resident Walter Lucas said.

Crews at the scene of a deadly car crash in Tom’s River, New Jersey, on Sunday, November 10, 2019. CBS News

Police said it was around 6:30 a.m. Sunday when the car and bodies were found. A crane lifted the car out at around noon. After it was towed away, investigators remained on the scene for several more hours.

A pair of officers were seen taking measurements of the dirt pile, which appeared to serve as a launching pad that propelled the car up and into the second story, Carlin reported.

“Really … breaks your heart. It really does,” Coakley said.

Among the people gathered to watch the car’s extraction from the building were friends of the victims.

Residents said the tight-knit community will rally to support the victims’ families and react to this tragedy with a message to all to drive carefully and responsibly. 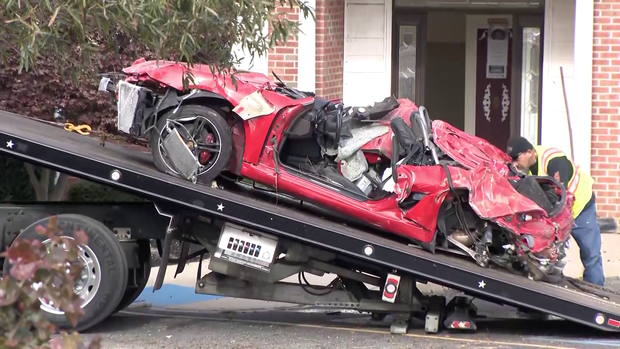