American investors returned from the Memorial Day weekend unable to ignore any longer a problem that has been festering in Europe for weeks. That’s the unstable political situation in Italy, where populist, anti-euro parties are ascendant and threatening yet another round of the eurozone debt crisis that first flared up in Greece in 2011.

Quick primer: Structural problems that have plagued the eurozone were never addressed amid the region’s crushing sovereign indebtedness and painful unemployment. The European Central Bank papered over the problem starting in 2012, with a pledge to do “whatever it takes” to keep the monetary union together. To this point, that has meant trillions worth of bond buying.

But a long “internal devaluation” that has forced citizens in “peripheral countries” like Italy to suffer higher taxes, public spending cuts and economic malaise is now sparking electoral anger. The problem became acute on Sunday when Italian President Sergio Mattarella moved to block the formation of an anti-euro government.

That puts the country on track for a snap election, potentially as soon as July, and it’s now seen as a referendum on whether Italy remains in the eurozone. Italian stocks have lost more than 12 percent over the last two weeks. And the 10-year Italian government bond yield has increased to more than 3 percent, a four-year high.

If all that wasn’t enough, Spain (another “too big to fail” but heavily indebted eurozone country) is also suffering as Prime Minster Mariano Rajoy’s leadership is under threat ahead of a confidence vote on Friday. His problem: a corruption scandal involving 29 individuals with ties to Rajoy’s People’s Party apparatus.

Why does any of this matter to American investors? Two big reasons.

Risk of contagion to banks

The sell-off in U.S. stocks was led by the financial sector, which as a group lost 3.3 percent vs. a 1.2 percent loss for the S&P 500. The fear is that the weakness in Italian and Spanish sovereign bonds metastasizes and starts to pull down European banks that rely on these bonds for capital reserves. 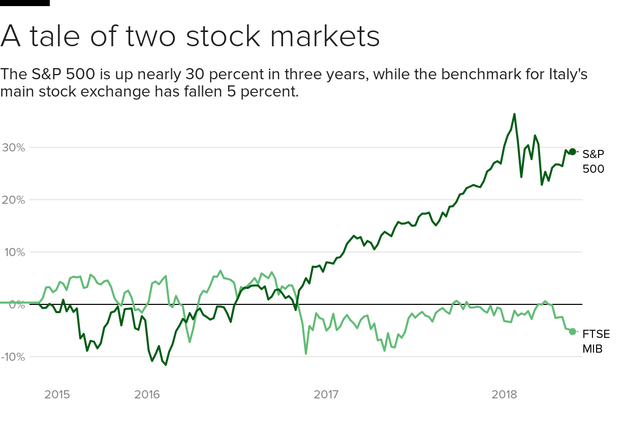 As the 2011-2012 eurozone crisis demonstrated, the nightmare is a self-reinforcing downward spiral. Lower sovereign bond prices (and thus higher yields) weaken bank stocks and bonds, which results in a pullback in lending and capital market losses. That in turn undermines economic growth, which lowers tax revenues, further drops government bond prices and raises borrowing costs as politicians are forced to consider bailing out banks.

U.S.-based banks risk getting caught in the crossfire because of their European asset holdings.

Worse before it gets better?

The second big factor is the realization that the situation is likely to get worse before it gets better, even if Wall Street rebounds in the near term, as Wednesday morning’s stock index futures are indicating. If the European Central Bank intervenes now to quell fears, it will merely embolden the anti-establishment politicians in Italy and likely increase their support among voters in the upcoming election.

But if the ECB lets the situation worsen, it could grow beyond its ability to control, given that Italy’s government is eight times the size of Greece’s, but its bond market, on account of the country’s deep indebtedness, is the world’s third largest.

What will the ECB do? It was on track to taper its bond-buying program starting in July down to zero by January. That looks unlikely now. This weekend’s G-7 meeting of global finance minsters could reveal what happens next.