Despite its large population and 55 electoral votes, California is often overlooked in the general election, unless presidential candidates need to jet to the state for a quick Hollywood fundraiser. It’s a firmly Democratic state, so Republican and Democratic nominees don’t need to make regular campaign stops there.

However, with its new primary date on Super Tuesday and March and its host of delegates to be won, California is key for candidates hoping to win the Democratic nomination. This weekend, fifteen Democratic candidates are descending upon the state to campaign, with most of them also speaking at the state’s Democratic convention on Saturday.

Harris, one of the state’s senators and former attorney general, is hoping to capitalize on a home state advantage in the California primary. Her campaign announced Thursday that 33 State assembly members were endorsing her presidential candidacy, after one report observed that she does not have her home state “locked up.”

Former Vice President Joe Biden, who is leading in national and state polls, will not be in the Golden State on Saturday. He’s campaigning in Ohio, another state which is generally ignored in the primary elections, but it is considered critical in the general election.

Biden’s strategy is to methodically win over white, working class, midwestern voters who have voted for Republicans in recent years, making Ohio a more strategic target than California. He will be speaking at a Human Rights Council dinner in Columbus Saturday. 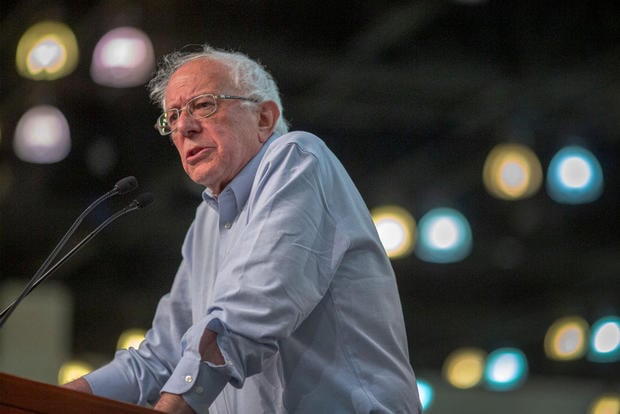 Sen. Bernie Sanders appears at a campaign rally at the Pasadena Convention Center on May 31, 2019 in Pasadena, California. David McNew / Getty

Even if one candidate wins the California primary decisively, the state has 495 delegates — enough to grant a significant amount to candidates who won lower shares of the vote. It’s still a key battleground that could provide a number of delegates who come in second or third in the primary.

“There’s a chance for maybe two, three, maybe even as many as four — depending on how the contest is going — candidates to collect enough delegates here to continue on,” CBS News correspondent Ed O’Keefe said on CBSN.

The primary date was previously in June, but the state moved the election to March to have more relevance in determining the eventual nominee.