Five million workers will get a raise on Jan. 1 when new minimum wage requirements take effect in 20 states and nearly two dozen cities around the U.S.

One person expecting a pay hike is Halpert Baldwin, who makes beds and handles laundry in a nursing home near St. Louis. With Missouri’s minimum wage rising to $8.60 an hour, Baldwin will see a 60-cent bump that she says will take some of the bite out of her monthly bills. “It makes a difference,” Baldwin said, “but a lot of people are still making less than $10 an hour.”

In Missouri and neighboring Arkansas, voters in November overwhelmingly approved a minimum-wage increase, which directly affects about 1 million workers. Eighteen other states will also see their minimum wage rise on Jan. 1 as a result of previously approved legislation or inflation adjustments to their states’ minimum wages.

Altogether, 5 million Americans will see higher pay on the first day of the New Year, estimates the Economic Policy Institute, which has tracked minimum wage data since 2010.

“It’s been a long time since we’ve raised the federal minimum wage, and if Congress isn’t going to do it, state lawmakers are feeling compelled to do it, and even local lawmakers,” said David Cooper, senior economic analyst at EPI, a left-leaning research group. “The minimum wage is such a simple, straightforward way to improve wages for people.”

Next year it will have been a decade since Congress last increased the federal minimum wage, approaching a record stretch between raises. Since then, 29 states, and more than 40 cities or counties, have hiked their minimums above the federal $7.25.

Sustained campaigns like the “Fight for 15” and growing inequality have helped keep the pay issue front of mind, especially in coastal states, where the cost of living outpaces most people’s pay.

“The ‘Fight for $15’ has elevated this issue in a way we haven’t seen. There’s greater awareness, publicly, about the fact that wages have been largely stagnant for a long time,” Cooper added. 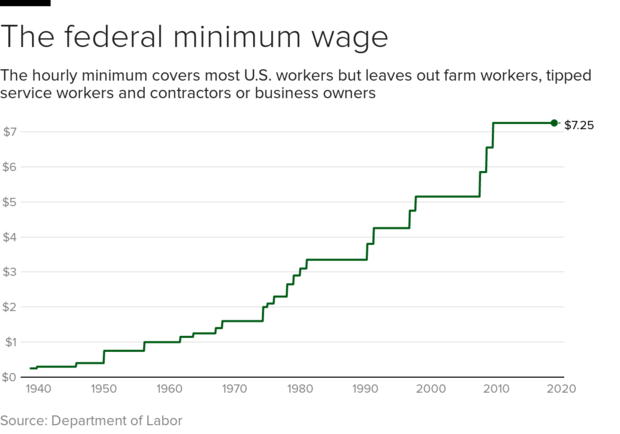 The increases run the gamut from 5 cents an hour in Alaska, which tied its minimum wage to inflation in 2014, to $1.50 an hour in New York City, where the minimum for most non-service jobs is gradually moving toward $15 an hour. More than 40 cities, half of them in California, have implemented their own minimum wages, reflecting the increasing costs of living in many of the country’s most economically dynamic areas.

“Politicians generally are dramatically less progressive on economic issues than voters are,” said Colin Diersing, a spokesperson with the Fairness Project, an organization that advocates for pro-worker ballot initiatives. 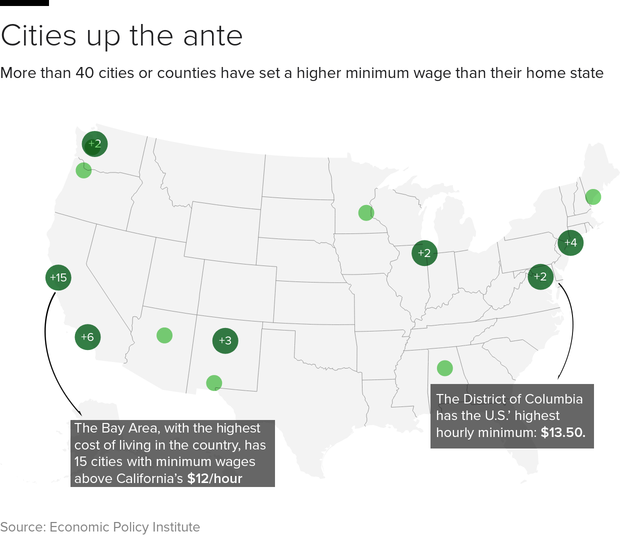 The popularity of minimum wage increases with voters has sometimes led to battles between voters and legislatures, as well as between states and smaller communities within them. Many of the states that voted to increase their minimums have also previously passed laws forbidding cities from setting their local wages higher. Workers in Birmingham, Alabama’s largest city, have been fighting the state in court since 2016 over whether the city has the right to raise its wages. In Michigan, legislators this year passed a wage increase before it was slated to go on the ballot in November, then, after the election, passed laws reducing the wage increases.

For some, the wage increases aren’t entirely welcome. At Granny Shaffer’s restaurant in Joplin, Missouri, owner Mike Wiggins is reprinting the menus to reflect the 5, 10 or 20 cents added to each item.

A two-egg breakfast will cost an extra dime, at $7.39. The price of a three-piece fried chicken dinner will go up 20 cents, to $8.78. The reason: Missouri’s minimum wage is rising.

Wiggins said the price hikes are necessary to help offset an estimated $10,000 to $12,000 in additional annual pay to his staff as a result of a new minimum wage law taking effect Tuesday.

“For us it’s very simple. There’s no big pot of money out there to get the money out of” for the required pay raises, Wiggins said.

Economic studies on minimum wage increases have shown that some workers do benefit, while others might see their work hours reduced. Businesses may place a higher value on experienced workers, making it more challenging for entry-level employees to find jobs.

For Baldwin, the nursing home worker in St. Louis, a 60-cent raise is bittersweet. Last year, she briefly made $10 an hour until Missouri passed a law to pre-empt wage increases in its cities. It took another year for voters to raise the statewide minimum wage. She’s working toward getting a new professional credential, with which, she hopes, another raise can be forthcoming.

“I feel pretty good, but we can always do better,” she said of her pay bump. “It’s beautiful now, hopefully they won’t be able to take it away as they did with the $10.”

— With reporting by The Associated Press