A wildlife photographer captured stunning images of a rare African black leopard, which would be among the first high-quality photos of such a creature on the continent. Will Burrard-Lucas snapped photos of the black leopard in the wild during a safari in Kenya, he wrote in a blog post published Wednesday.

When Burrard-Lucas heard about possible sightings of a black leopard, also known as black panther or jaguar, at Laikipia Wilderness Camp, he went there to see it with his own eyes. The animals are known for being extremely secretive and hard to spot. Only a small percentage of all leopards are black.

“I had high hopes of photographing a leopard, but would it be black?” he wrote.

With the help of a guide, he set up Camtraptions camera traps along a path where they found fresh footprints — though it was unclear if the tracks belonged to a black leopard or a regular spotted one. And on the fourth night, he was able to snap high-quality photos of a black leopard — a sight he couldn’t believe that he caught with his cameras.

“As I scrolled through the images on the back of the camera, I paused and peered at the photograph below in incomprehension … a pair of eyes surrounded by inky darkness … a black leopard! I couldn’t believe it and it took a few days before it sank in that I had achieved my dream,” he wrote. 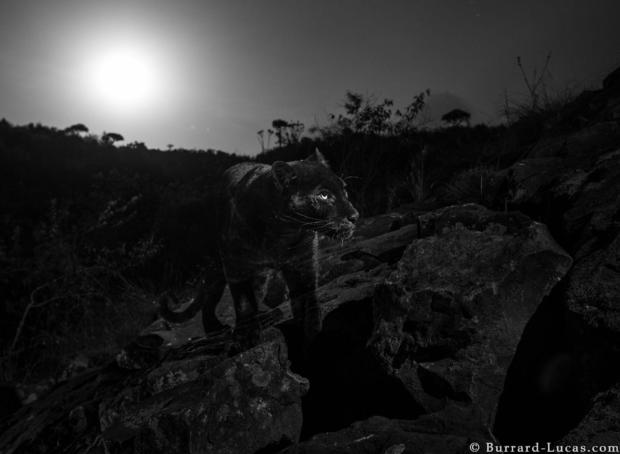 Most recorded sightings of black leopards have been in forests of Asia. Before Burrard-Lucas‘ efforts, researchers with the Institute of Conservation Research at San Diego Zoo Global and Kenya’s Loisaba Conservancy published a study Jan. 29 confirming five sightings of a female black leopardess last year in Laikipia County, Kenya. With their cameras, they caught first photographic evidence of a black leopard in Africa since 1909.

One of the leading researchers in the study, Nicholas Pilfold, PhD, told CBS News that sightings of the creatures was “common knowledge locally,” but lacked visual proof. He complimented Burrard-Lucas‘ photos because “having images of that quality really hits home.” He believes the more images like this that are available, the more people will be inclined to help the species and their habitat.

“Rare and unique sightings like this inspire people to protect,” Pilford told CBS News, adding that this kind of attention will benefit conservation in Kenya.