America’s interest payments are about to skyrocket

The Fed’s interest rate hikes are doing more than hitting consumers in the credit cards. They’re also making it much more expensive for the U.S. to carry its debt load.

While they’re not currently a subject of President Trump’s Twitter outrage, America’s interest payments have become a point of concern for some on Wall Street. Those payments are projected to triple to more than $600 billion by 2023, reflecting rising interest rates as well as the exploding deficit. That figure approaches the amount the U.S. spends on national defense every year, and dwarfs what it spends on agriculture, Medicaid, income security and veterans’ programs, to name just a few.

“Rarely have deficits risen when the economy is booming. And never in modern U.S. history have deficits been so high outside of a war or recession (or their aftermath),” the Committee for a Responsible Federal Budget wrote in a recent blog post.

In the first full year of Donald Trump’s presidency, the federal deficit rose to its highest level in six years. Next year, it’s projected to rise even higher.

Is this historic abnormality a problem? Some economists think so. The Congressional Budget Office warned about the debt in its latest budget projection. “[H]igh and rising debt would have serious negative consequences for the budget and the nation,” the CBO wrote, adding that high debt makes a fiscal crisis more likely and leaves less room for lawmakers to change tax and spending policies to help solve a crisis.

Former Trump White House Economic Adviser Gary Cohn echoed these fears last week. “We have a huge debt and deficit problem,” Cohn said on “CBS This Morning,” while claiming the deficit was unrelated to the substantial tax cuts he orchestrated last year.

A recent Moody’s analysis noted that persistent high debt, among other factors, would lead to “persistent deterioration in the U.S.’s fiscal strength over the next 10 years.” Because it’s the world’s largest economy and the dollar is the world’s favorite reserve currency, the U.S. is better positioned to withstand debt levels that might send a smaller economy reeling, William Foster, senior credit officer at Moody’s, told CBS MoneyWatch. But it still wouldn’t be great for the country’s long-term financial health. 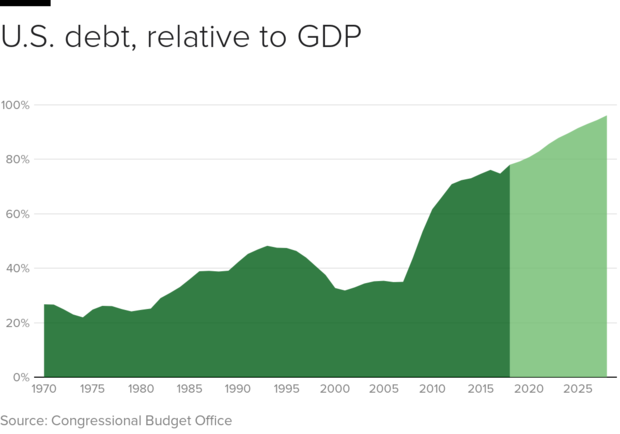 High federal borrowing could also crowd out other types of investment. The federal government borrows money by issuing treasuries; the investors who buy them are effectively lending to the government. A very high supply of treasuries could effectively starve other parts of the economy of investors’ money, some analysts say.

“If you issue more and more treasuries, the dollars you use to buy them need to come from somewhere. They could have gone into the stock market, or into other investments,” according to Torsten Slok, chief international economist at Deutsche Bank.

But for the U.S., expensive debt is nothing new. In the 1990s, interest rates were much higher, so although the U.S. carried a smaller debt, Americans paid much more to service it. Today’s interest expenses are still below their historical highs, noted Mark Weisbrot, co-director of the Center on Economic and Policy Priorities.

Even if interest rates increase dramatically, it would only bring interest payments to the relative level they had in the 1990s. 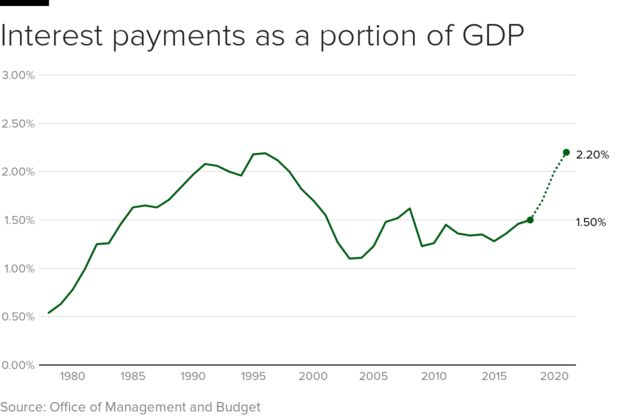 “You’re not suddenly going to wake up in the next year or two and see a huge burden on our debt,” Weisbrot said. “Of course interest rates go up. But interest rates only go up when the economy is growing, so the burden of high interest rates is relieved by [higher] GDP.”