Sen. Elizabeth Warren said in an interview with CBS News at the tech conference South by Southwest that Amazon is an example of why major tech companies should be broken up, while Warren’s fellow 2020 contender Sen. Amy Klobuchar said at an event that she wants an investigation into if breaking up these industury giants is the right solution. Warren and Klobuchar are two of the many Democratic presidential candidates appearing at the South by Southwest (SXSW) festival in Austin, Texas.

In an interview with CBS News’ Ed O’Keefe at SXSW which will air on “Face the Nation” on Sunday, Warren used Amazon as an example for why she believes big tech companies should be broken up. Warren on Friday spoke not far from where Amazon had planned to build a headquarters before abandoning the plan. At that event, Warren introduced a proposal that would break up some of the country’s biggest tech companies, including Amazon, Apple, Google and Facebook.

“The way markets work is that they have to have rules, and they have to have cops to enforce them,” Warren said about her belief in instating antitrust rules in the tech arena. She also said she could be described as a capitalist who believes “in a level playing field.”

“We want to keep that marketplace competitive, not let a giant who has an incredible information advantage and a manipulative advantage, snuff you out,” Warren said in the panel. Upon Giridharadas noting that the owners of these companies would profit less under her proposal, Warren dryly replied “Boo hoo.”

In an interview with CBS News’ Ed O’Keefe before she was interviewed by Recode’s Kara Swisher at SXSW Saturday morning, Klobuchar talked about her privacy legislation to ward against tech companies mining users’ data online.

“I have bipartisan legislation to give you notice of breaches, to let you opt out of having your data shared, and then most importantly, to making this understandable, when you decide whether or not you want to have your data shared,” Klobuchar told O’Keefe. She believes that tech companies should be taxed for sharing data without users’ permission.

“If they start sharing your data in a big way, we should start taxing them for that, and that money should go back to consumers either to protect cyber security, or to bring down our debt,” Klobuchar said. “They shouldn’t be able to just take your data, and use it themselves, or sell it to other people without any consequences.”

In her interview with Swisher, she said that she wants an investigation into whether Google and Facebook need to be broken up. 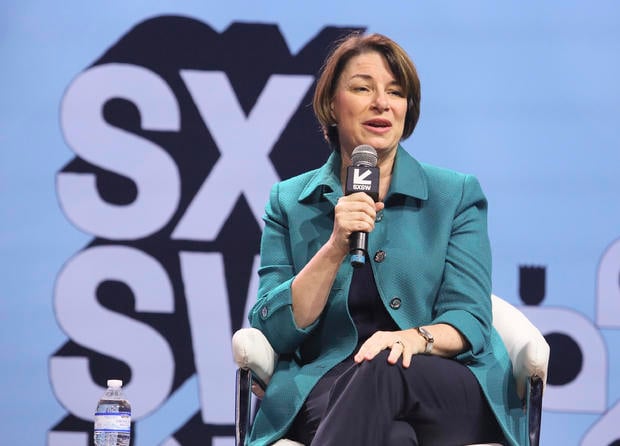 “You want competition and innovation. You just don’t want them to control everything,” Klobuchar said about major companies in tech and in other industries, explaining her support for antitrust measures.

Both Klobuchar and Warren praised President Teddy Roosevelt for enforcing strong antitrust laws while he was in office. When asked by Giridharadas who was her favorite president, Warren said Roosevelt without hesitation.