Attorneys group on Smollett case: “The rich are treated differently”

Cook County State’s Attorney Kim Foxx is under fire by a national attorneys group following her office’s decision to drop all charges against actor Jussie Smollett earlier this week. Smollett had been facing 16 felony counts for allegedly lying to Chicago police about staging a hate crime.

On Wednesday, the National District Attorney’s Association (NDAA) issued a statement excoriating Foxx’s office for taking advice from “politically connected friends of the accused” and for failing to resolve the case “with an acknowledgement of culpability on the part of the defendant.”

“The case in Chicago illustrates a point that must be discussed in an effort to ensure fairness in our criminal justice system: the rich are treated differently, the politically connected receive favorable treatment, and Lady Justice sometimes peeks under her blindfold to see who stands before her,” the group said. “NDAA rejects these inequities as they are antithetical to our founding principles of justice: that no one is above the law.”

The Virginia-based NDAA serves as a national resource for the training and assistance of the nearly 2,700 prosecutor offices across the country.

CHICAGO, ILLINOIS – MARCH 26: Actor Jussie Smollett after his court appearance at Leighton Courthouse on March 26, 2019 in Chicago, Illinois. This morning in court it was announced that all charges were dropped against the actor. Nuccio DiNuzzo / Getty Images

NDAA’s sentiment echoed sentiments by CBS News legal analyst Rikki Klieman. On “CBS This Morning’ on Wednesday, Klieman said, “This is an example of justice for the rich and powerful versus justice for the poor.”

Smollett’s charges were dropped after he performed two days of community service this past week, and because he agreed to forfeit his $10,000 bond. The city spent more than $150,000 on his case.

“This is totally not typical,” Klieman said, adding, “I don’t see it as any different from the rich people who got their kids into college by untoward means because they had money and power and what you have here.”

On Wednesday, Foxx defended her office’s decision to drop the charges against Smollett. CBS News’ Adriana Diaz asked her, “If your own prosecutor told us that he believes Mr. Smollett is guilty, why not get that guilty plea from him as part of this deal?”

“Because according to the statue you don’t have to. If he does and pays the restitution, if he does the community service, how he spins what he’s done — is that outcome consistent with others who are similarly situated,” Foxx said.

Foxx also claimed her office is on the same page as the Chicago police, despite the public outrage voiced by both the Mayor Rahm Emmanuel and the Chicago Police Department. Emmanuel called the decision by Foxx’s office “a whitewash of justice,” while the Chicago Police Superintendent Eddie Johnson said the city “is still owed an apology.” 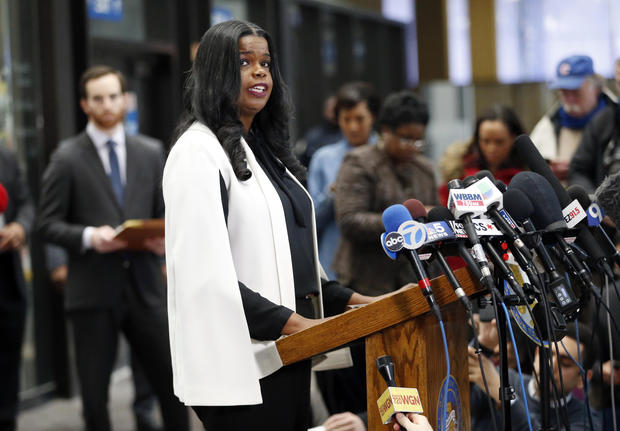 “I think the state’s attorney’s office and Chicago police and the mayor have a shared view. Their frustration on how this case was handled — I hear it and I respect it and I say to them what I said to others. This case was treated no differently,” Foxx said.

The 36-year-old Smollett, who is black and openly gay, told police he was attacked by two masked men when he was returning home from a Subway sandwich store Jan. 29 around 2 a.m. Police arrested two brothers who they initially linked to the alleged attack. But police said the brothers then said Smollett had paid them $3,500 to stage the attack.