He will run to become Hamilton County Sheriff as a Republican candidate in next May’s primary.

Garrett hopes to replace the man who hired him, Sheriff Jim Hammond, who is retiring.

“I have been humbled by the support and encouragement from an overwhelming number of community leaders and citizens as Pam and I have explored seeking this position.”

“With twenty-eight years of service to this community as a law enforcement officer, I am proud to announce I will be seeking your support as a candidate in the Republican Primary for the office of Sheriff. I’ve been honored to serve these last few years with the men and women of the Hamilton County Sheriff’s Office. Together we will focus on the safety of this county through innovation and the commitment of providing the highest level of law enforcement services to our community.”

Garrett worked in the Chattanooga Police Department for 25 years before retiring.

In 2019, he was appointed Chief Deputy by Sheriff Hammond. 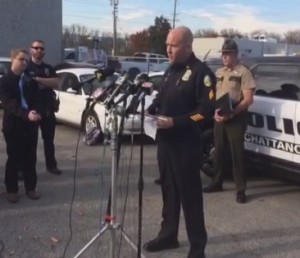