Up, up and away at the TWA Hotel

The Trans World Airlines Flight Center at JFK Airport in New York City has been called a cathedral to aviation – the Grand Central Station of the jet age. “It was magnetic,” said Louise Harpman, an architectural historian at New York University. “It has a sense of grandeur. It’s inspiring, a building like that. It looks like a bird taking flight. When you’re inside of it, then you’re kind of part of this theatricality of how people move through space. We don’t have other buildings like that.”

When the Flight Center opened in 1962, it was more than a terminal; it was its own destination. It was designed by famed architect Eero Saarineen, the man behind the St. Louis Arch.

“People think about Saarinen as a structural gymnast,” Harpman said. “He made buildings do something they’d never done before.”

The popular reception to the building she said, was “through the roof. People loved it. They thought it was incredible.” 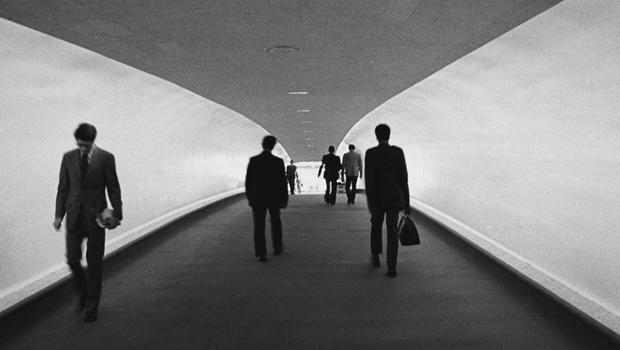 But TWA’s fortunes floundered, and the Flight Center was shuttered in 2001. It sat closed, but not forgotten.

“The bulldozer pulled up to the building and was ready to knock it down, because it was in the path of progress,” said developer Tyler Morse. “Luckily the preservationists protected the building.”

Morse stepped up in 2014 with a plan to reimagine the aging terminal as the new TWA Hotel.

The condition of the building, once work started, was a site filled with asbestos and lead paint.  Every pane of glass had to be replaced.

For Morse, this was a passion project where no detail was too small. With no right angles anywhere in the building, Saarinen’s original tiles – in three different sizes – used to make the building’s distinctive curves had to be recreated. 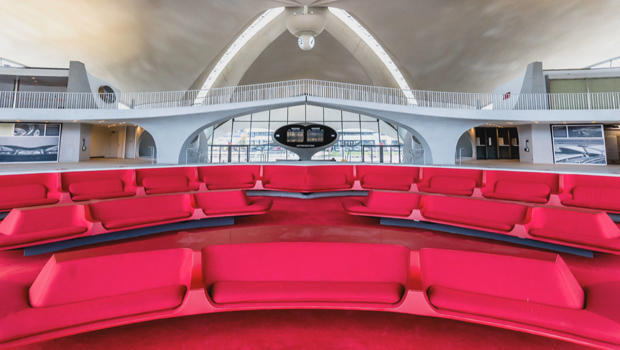 Morse wanted everything done right – from the signature clock in the center atrium, to the chili pepper red sunken lounge, to the iconic Solari departure boards, all restored to their original 1962 glory. “We wanted to be historically authentic here,” Morse said. Which meant going to Udine, Italy, two hours outside of Venice, where the original board was made 57 years ago.

The flip signs (and their distinctive sound) have been a staple of train stations and airports worldwide. 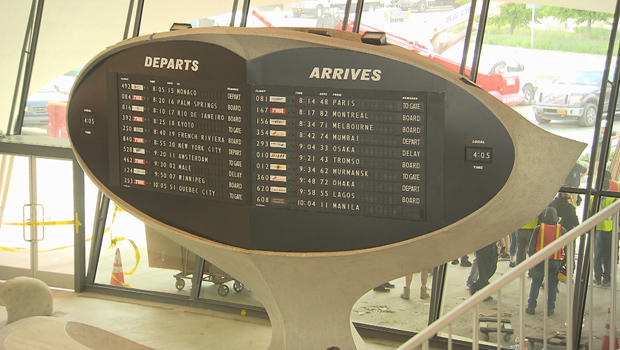 The terminal’s original departure/arrival board has been restored.  CBS News

Another throwback that will have people “looking up”: A 1958 Lockheed Constellation, finding new life as a cocktail lounge, where you can even sit at the pilot’s controls in the cockpit.

“You come in here and grab a drink, fly the plane a little bit!” said Morse. 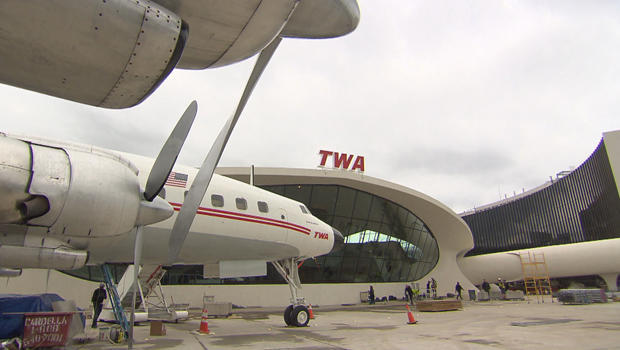 A 1958 Lockheed Constellation, converted into a cocktail lounge, at the TWA Hotel.  CBS News

Aviation superfan Tommy Fletcher was just four years old when the Flight Center closed; nearly 18 years later, he was one of the first to book a room. “When you think of TWA, you just think it’s, like, luxurious and fancy and fun, and so to be able to experience that at an airport is exciting, it’s awesome,” he said.

It’ll cost him around $350 a night, complete with furniture designed by Saarinen, and multipaned glass to keep the out the jet noise. There’s also a rooftop infinity pool, six restaurants (including Jean-Georges’ Paris Café), and eight bars.

Correspondent Kris Van Cleave asked, “When you walk in there for the first time, what do you think will go through your head?”

“I guess just happiness,” Fletcher replied. “Like when you walk into Disney [World], that happiness and excitement, I feel like that, ’cause it’s like my Disney World a little bit.”

Morse said, “This is a place that people want to be. JFK is the sexiest airport in the world.”

“Said no one ever!” laughed Van Cleave. “You really think they’re going to come all the way out here to have a drink at the airplane bar and dinner at one of the restaurants?”

“I think some of them will come,” he said.

Morse is banking on a little nostalgia, too: “I carry around a TWA tote bag. And I cannot tell you how many people approach me and say, ‘No way. TWA? What’s going on with TWA? Are you bringing TWA back?’ There’s still a lotta love for TWA.”

Enough love to sell out a trip to a bygone era with a runway view.