Back on the baseball field, Steve Scalise recalls the “lowest point” after shooting

House Republican Whip Steve Scalise will play baseball against the Democrats Thursday night, exactly one year after he was shot during a practice. The Louisiana Congressman spent the past year re-learning how to do everything from walking to playing ball. After the exhausting recovery, and just two months removed from his most recent surgery, the GOP’s star player is helping keep the more-than-100-year baseball tradition alive.

“I can’t move the way I used to…It’s better than it was a few weeks ago, but, you know, if the ball’s a few feet away from me it’s not as easy to get to,” Scalise told CBS News correspondent Nancy Cordes.

For his teammates, the fact that Scalise can play at all is a miracle. The House’s No. 3 Republican has endured more than nine surgeries to repair internal organs and install steel plates after an Illinois man opened fire on the GOP team at an early morning practice. A single bullet tore through Scalise’s hip, shattered his femur, and ripped open blood vessels before his security detail could bring the gunman down.

“I think the lowest point was the first time I saw my kids,” Scalise said. “You know it was tough for them to absorb something like this, to know that your dad was shot, somebody tried, tried to kill me. You know, to comprehend that for, at the time, a 10- and an 8-year-old, that’s really tough.”

Baseball is a big deal for the Louisiana lawmaker, who had been considered his team’s best player, and his recovery has been celebrated by both sides of the aisle. Democratic players set aside a century-old rivalry last week and welcomed Scalise to their practice, but the stepped-up police presence was hard to miss.

“Has anything changed over the past year that would make not just members of Congress, but all Americans, safer from gun violence?” Cordes asked.

“You know this event was unique, I mean, you see mental illness becoming a bigger focus, which I think is a good thing,” Scalise said. 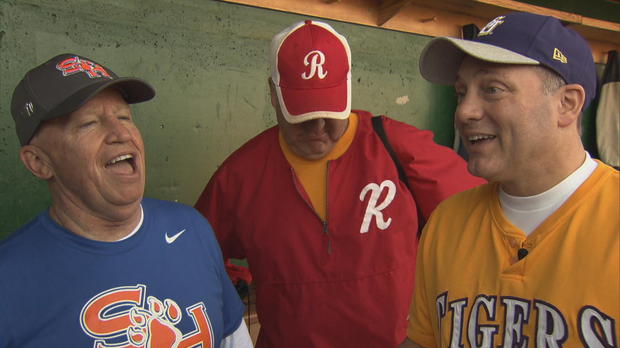 “In his case, there were two people that with guns were able to save him and his team,” Richmond said. “To me, this happens far too much in our country.”

But on Thursday night, politics takes a back seat to pitching and the fulfillment of a yearlong goal for Scalise. Still, Scalise isn’t so sure the Democrats are going to go easy on them.

“I’d like to think that, but I think that’s where the civility ends – on the baseball field,” Scalise said.

While Scalise said he’s itching to get back on the field, his children will be cheering dad on from home. Seeing their dad on a baseball field is still a bit too emotional.