Barbershop owner pays off seniors’ debts so they can graduate

Earlier this month, billionaire investor and philanthropist Robert F. Smith made national headlines for promising to pay off the debts of Morehouse College’s class of 2019. Smith’s grand gesture made a huge impact on about 400 graduating seniors – and it inspired one woman to help 14 more.

Season Bennett, who owns a barbershop in Charlotte, North Carolina, saw Smith’s commencement address, and his pledge of donating $40 million motivated her. “I thought, ‘Wow, that is just such a powerful thing for anybody,'” Bennett told CBS affiliate WBTV. “So many students go into so much debt just trying to get an education.”

She decided to call up a local high school and see if money was preventing any of the senior students from graduating. What she learned shocked her.

Fourteen students at East Mecklenburg High School were in debt, and per the school district’s policy, they would not be able to receive their diploma until their outstanding dues were paid.

“It just seems like that’s just the basic in our culture,” Bennett said. “You need to get at least your high school diploma.”

The students had racked up a combined $4,500 in debt – something Bennett was determined to amend. What was even more shocking was that several of the students were in debt to the school’s band program.

“I know some people were kind of thinking, ‘Oh, maybe there was damaged property,’ or these kinds of things,” Bennett told WBTV. “And I said, ‘These kids are doing something good, they’re on the band, they’re having school spirit.'”

The barbershop owner created a GoFundMe page and set the goal at $4,500. Then, she started posting about her mission on social media. She urged people to give anything they could and to spread the word to their friends. Fortunately, the right person saw one of Bennett’s posts: the daughter of an NFL player. 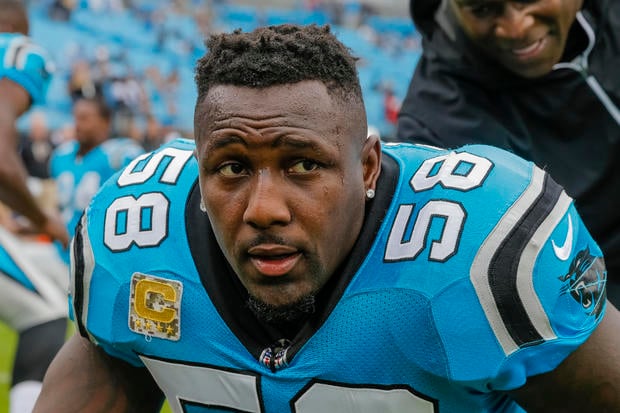 Thomas Davis, who once played on the Carolina Panthers, was inspired by the local barbershop’s mission. He donated more than the students needed to pay off their debts. Bob Leverone / AP

“Thomas Davis‘ daughter saw it, and she told her dad about it,” Bennett said. Davis once played on the Carolina Panthers and even got his haircut at Bennett’s Headlines Barbershop once, Bennett told CBS News.

“He said, ‘Hey … we’re going to make sure that these students graduate,'” Bennett said. The GoFundMe campaign had raised just over $1,700 and Davis was generous enough to donate the rest – and then some. He gave $4,000 to Bennett’s cause, she told CBS News.

All 14 seniors who were previously in debt could now graduate. Bennett was ecstatic and said one student’s reaction meant the world to her. “One girl dropped to her knees, and she just said, ‘I have to call my mom,'” Bennett said. “She said her mom was working on getting a loan.”

Bennett was determined to help the kids because she knows the importance of getting an education. “I just think about that quote by Martin Luther King when he says, ‘You don’t have to see the whole staircase, you just have to take the first step,'” she said. Thanks to Bennett – and Davis – 14 students were able to take the first step on their staircase.