Bill Buckner, the Major League Baseball great most commonly remembered for a crucial error in the 1986 World Series, has died at the age of 69, the Associated Press reported according to a family statement. Buckner had been battling dementia, according to the statement.

According to ESPN’s Jeremy Schapp, Bill Buckner’s wife, Jody Buckner, provided the following statement: “After battling the disease of Lewy Body Dementia, Bill Buckner passed away early the morning of May 27th surrounded by his family. Bill fought with courage and grit as he did all things in life. Our hearts are broken but we are at peace knowing he is in the arms of his Lord and Savior Jesus Christ.”

Lewy body dementia affects over 1.3 million Americans and is a type of neurodegenerative disease that shares similarities with Parkinson’s and Alzheimer’s disease. It is not known how long Buckner had been battling the disease before he died.

Former Boston Red Sox player Bill Buckner acknowledges the cheers from the crowd before throwing out the ceremonial first pitch at the MLB baseball game between the Boston Red Sox and Detroit Tigers on April 8, 2008, at Fenway Park in Boston, Massachusetts. Brian Snyder-Pool/Getty Images

Buckner’s MLB career spanned five teams over 21 seasons. He primarily played first base, but spent time in right and left field. A contact hitter not known for his power, Buckner accumulated over 2,700 hits in his career, won the 1980 batting title with a .324 average, and was a 1981 All Star with the Chicago Cubs. He finished in the top 25 of MVP voting four times in his career, including top 10 finishes in 1981 and 1982.

Buckner’s death was first reported by former Mets Manager Bobby Valentine, who wrote a message paying tribune to his childhood friend on Twitter.

As I clear my head and hold back the tears I know I will always remember Billy Buck as a great hitter and a better friend. He deserved better. Thank god for his family. I ll miss u Buck!

The Chicago Cubs issued a statement remembering Buckner, who spent nearly a decade with the team.

“We are deeply saddened by the passing of Bill Buckner, a great ballplayer and beloved member of the Cubs family… After his playing days, Bill served as a valued member of our player development staff and was a fan favorite during his appearances at our Cubs Conventions,” Cubs Executive Chairman Tom Ricketts said. “On behalf of the Cubs organization, I extend our sympathies to Bill’s family and his many friends.”

Buckner was born in Vallejo, California on December 14, 1949.  He was selected by the Los Angeles Dodgers in the second round of the 1968 Major League Baseball and joined the team in 1969 for one at bat after two minor league seasons.

Buckner played for the Dodgers as a regular from 1970 until 1976. The prime of his career was spent playing for the Chicago Cubs from 1977 to 1984. Midway though the 1984 season, he was traded to Boston for Mike Brumley and future Hall of Famer Dennis Eckersley. It was in Boston that Buckner experienced the lowest point of his distinguished career.

The Red Sox looked to end a 68-year title drought in the 1986 World Series against the New York Mets. In the bottom of the 10th inning of Game 6, with the Red Sox leading the series 3 games to 2 and holding a 5-4 lead in the game, the team had a chance to finally win the World Series. But after a series of mistakes by other teammates and a wild-pitch by closer Bob Stanley that brought the tying run home, the Mets’ Mookie Wilson came to the plate.  On the 10th pitch of the at bat, Wilson hit a ground ball down the first-base line, where Buckner, the 16-year veteran, scooped down to pick up the ball and field it for the final out of the inning, preserving a chance for a Red Sox series victory.

But the ball went through Buckner’s legs and the Mets’ Ray Knight scored the winning run. Two nights later, New York won the 1986 World Series with a Game 7 victory.

Vin Sculley’s call of the play has been played throughout baseball broadcasts ever since:  “With two out, three and two to Mookie Wilson…little roller up along first…behind the bag!…it gets through Buckner…here comes Knight and the Mets win it!”

The picture of a solitary Bucker, stunned and isolated, waking off the field is one of the most indelible images in baseball history. Bucker played four more seasons in the twilight of his career for the Red Sox, California Angels and Kansas City Royals, but he never seemed to recover from the error in the World Series. 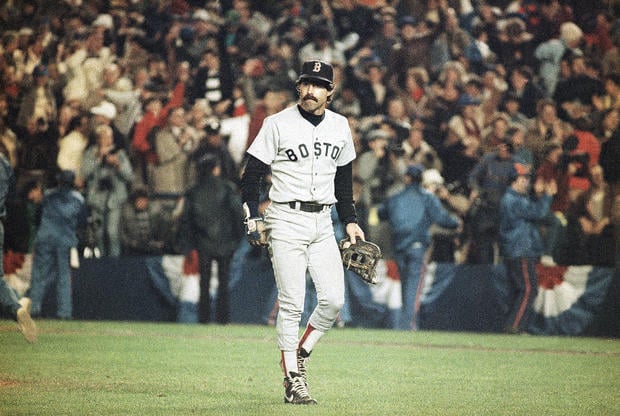 Boston Red Sox first baseman Bill Buckner is a picture of dejection as he leaves the field after committing an error on a ball hit by New York Mets Mookie Wilson which allowed the winning run to score in the sixth game of the World Series, Saturday night, Oct. 25, 1986 in New York. Rusty Kennedy/AP

For years some Boston fans verbally abused him and his family. It was only later on that he received forgiveness from fans, the media and himself. In 1990 he received a standing ovation at Fenway Park. In later years, he turned to the business of commercial real estate and the car dealerships, and even made money off memorabilia of himself and Wilson. Finally, the Red Sox honored Buckner by having him throw at the first pitch at the 2008 home opener, a ceremony replete with standing ovations and speeches by Buckner and others.

The Red Sox won four World Series titles between 2004 and 2018, making the infamous “Curse of the Bambino” between 1918 and 1986, and thus Buckner’s error, seem that much more insignificant.