Brother who was visiting gangster during prison break speaks out

NANTERRE, France — French investigators believe a team of four or five loyal accomplices carried out the brazen prison helicopter escape of one of France’s most notorious criminals. The armed, masked men took a helicopter pilot hostage, forced him to land Sunday in Reau Prison’s yard, used power tools to break through the prison yard’s doors and hustled Redoine Faid to freedom. Inmates could be heard cheering on cell phone video taken inside the prison during the bust.

Faid’s brother, Brahim, was visiting him at the time of the escape. He was detained immediately afterward and freed late Monday.

“I have nothing to do with the escape,” he told BFM television. Brahim Faid’s lawyer, Keren Saffar, said Redoine told his brother that someone was coming to get him and to stay where he was.

“Brahim Faid was stunned, he was shocked by the situation. And all he did was wait for the prison guards to come,” she said.

As CBS News correspondent Charlie D’Agata reports, if the case sounds like something out of a movie, that’s no coincidence. Faid has said he modelled his infamous 1990s bank and armored car heists on Hollywood crime thrillers like “Heat,” and once even thanked movie director Michael Mann for being his “technical advisor.”

Faid, a serial robber and murder convict, hasn’t been seen since leaving the prison near Paris. French police have launched a massive manhunt for him.

Philippe Veroni, deputy director of France’s organized crime police unit, said Tuesday that Faid had clearly planned the prison break carefully and had a band of accomplices willing to risk everything.

“This kind of person thinks about nothing except how to escape,” Veroni said. “He thinks about it, he reflects on it. It’s his entire life under incarceration.”

Investigators are also looking into whether Faid had help from inside the prison. 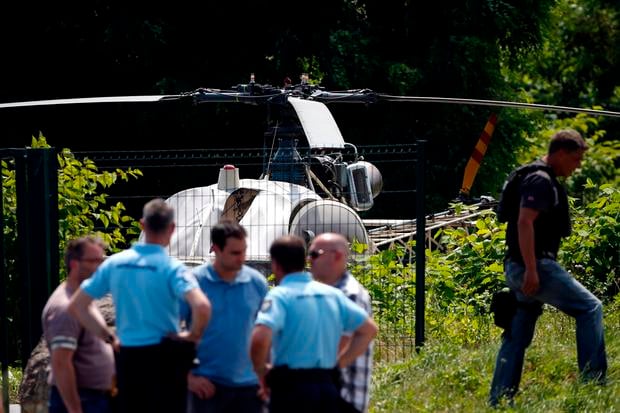 Police near a French helicopter abandoned by gangster Redoine Faid  in Gonesse after his escape from prison in Reau, July 1, 2018.

Staying on the run will become increasingly expensive for Faid as he tries to avoid capture, but authorities said they have no clear sense of how much money the serial robber of banks and armored trucks had stashed away from his previous crimes.

Faid has escaped from behind bars before – the previous time he used explosives hidden in tissues.

Nicole Belloubet, France’s justice minister, has come under increasing criticism for the flawed security around Faid. Speaking to skeptical lawmakers on Tuesday, she promised a report within two weeks detailing security shortcomings and said she would “accept all the consequences.”

A prison guard union member had said the helicopter landed in the only area of Reau Prison that did not have anti-helicopter protections. Months ago, a drone was spotted over the prison, which authorities now think may have been used to scope out an escape route.

The 46-year-old Faid was serving 25 years for the 2010 death of a young police officer killed during a botched robbery. In the 1990s, he led a gang involved in robbing banks and armored vans.

Veroni would not speculate on how long Faid could remain on the run.

“There are getaways that can last even longer than the sentence itself,” he said. “That doesn’t keep us from working on it.”