Car rams into 8 people on Calif. sidewalk, possibly on purpose

A car plowed into eight people on a Sunnyvale, California sidewalk Tuesday evening and it might have been intentional, authorities said. Some of the people hit have serious injuries, the city’s Department of Public Safety told CBS News.

Bicycle at scene in Sunnyvale, Calif. where a car hit 8 people on a sidewalk on evening of April 23, 2019 Shahar Hart

Choi said the car stopped when it hit a tree and the driver, who was alone in the vehicle, was taken into custody but hasn’t been charged with anything yet. The driver’s name hasn’t been released.

Choi told CBS San Francisco the car sped through an intersection and directly into the people on the sidewalk.

“It looks like this may have been an intentional act by the driver, based upon what’s on scene and also some statements of pain,” Choi said. “We are conducting that investigation. We don’t know what the motives were.” 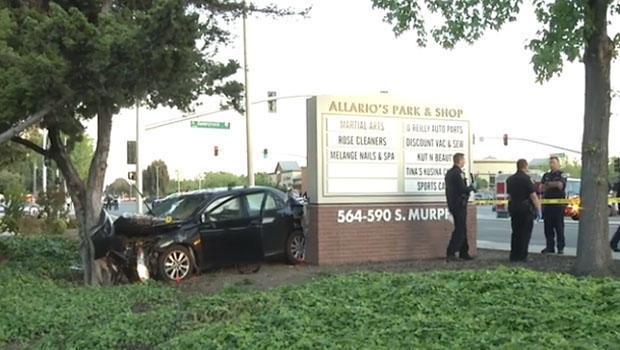 Choi said the victims reported that the vehicle didn’t try to veer away from them or to brake.

He told CBS News there were no skid marks on the road, adding it may have been a case of wrong place, wrong time for the victims.