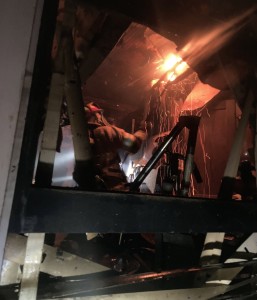 CHATTANOOGA, Tenn. (WDEF)- Chattanooga firefighters battled hot and humid conditions Wednesday night as they battled a fire at a vacant home in Hixson.  The Chattanooga Fire Department says that they responded to the 5700 block of Hixson Pike, near the intersection with Middle Valley Road and across the street from Hixson High School, at 10:08 PM after receiving numerous calls of smoke coming from a home.

When firefighters arrived on scene, they found smoke coming from a front corner of the home but could not enter through the front door because the front porch was destroyed. Crews attempted to enter through a back door but were unable due to that entrance being blocked.

Conditions at the site eventually improved allowing firefighters to enter through a front window. Once inside, they conducted a search of the residence to see if anyone else was inside. No one was inside the structure at the time of the fire.

Firefighters were eventually able to put out the fire after making sure that the structure was empty. There were no injuries as a result of the fire.

Currently the cause is under investigation.