Chattanooga Police say they used drone technology and their investigators to find the location of the carjacking suspect who fled the scene after the wreck.

They called out SWAT, hostage negotiators and K9 officers to the scene.

Police say after negotiations with the suspect failed, they sent in the dog and took the suspect into custody.

They also took another person into custody in the home. 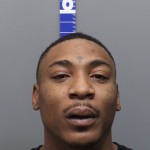 They have charged 29 year old Lejuan Gibson with the carjacking.

He was arrested in Red Bank just a couple of weeks ago for Aggravated Assault.

CHATTANOOGA, Tennessee (WDEF)- “I just looked up and rolled out of the way. I mean, if I didn’t I was gone,” said Gordon.

Chattanooga police say they responded to reports of multiple carjackings in the area of 4200 Block of Bonny Oaks. police made contact with the first victim who says a man entered his vehicle and tried to take it. Meanwhile a driver in the area Eric Gordon says multiple car accidents were caused by the frantic scene.

“I’ve never been in a situation with the airbags but they work immediately too. It was something else go dodge! It was pretty cool and as soon as contact was made, it was a hard hit, I’ve never been hit that hard.”

Police say The suspect then exited the first vehicle and attempted to take another vehicle.

“Try to get out the way and then the same thing happened to me I try to move out of the way, that was the plan was, almost as missed him but I couldn’t get out the way.”

He says he got rolled out of the car because he smaller smoke and he was nearly hit while laying on the ground in the road by the driver of the stolen car.

“The suspect, whatever happened whatever started all this store pick up truck as I was laying on the ground tried to run me over. I looked at the last minute and rolled under my truck and he was flying past don’t know how fast it was just a crazy mess.”

The suspect was unable to gain control of the second vehicle and ran away.