Collegedale Police located Claude Finch III in an apartment in the East Brainerd area. After a short foot pursuit Finch was taken into custody a few minutes before 5 p.m.
Finch will be booked on his 3 felony charges before being transported to the Hamilton County Jail.

Collegedale Police say that Claude Finch has just been apprehended in East Brainerd. We’ll have more details as they become available.

Official Statement from Southern Adventist University
On Monday evening, Campus Safety received a report of suspicious activity by an unknown driver, but when the officer investigated, the vehicle had already left the area. On Tuesday, Campus Safety responded to a report of a sexual assault.

We are deeply troubled that someone would come onto our campus and attack one of our students. The health and safety of our campus family is of the utmost importance, and we are working closely with the Collegedale Police Department as they investigate this incident. We are also providing care and support to those involved. 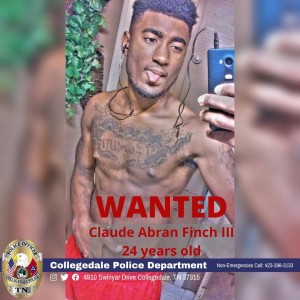 Collegedale police say it happened after 8 PM as the victim was jogging.

She says she noticed a vehicle at several locations around campus while she was running.

She says when she stopped to rest, someone grabbed her from behind and sexually assaulted her.

The victim gave officers a description of the suspect and his vehicle.

It matched the description from another incident Monday Night (handled by campus security, but not reported to police).

Within an hour, Collegedale officers stopped a suspect who claimed to be a Door Dash deliveryman.

But when asked to get out of the vehicle, they say he sped through student housing and escaped.

From the police statment, “Due to the safety concerns of having people walking nearby on the sidewalks and around the
buildings, the officer proceeded cautiously through and onto University Drive. Unfortunately the
driver was already out of sight.”

They have identified the suspect as Claude Abran Finch III.

Police say he is also a person of interest in another sexual assault that happened earlier that night on campus.

We have also learned that Finch is waiting a court date in December on an Aggravated Domestic Assault arrest in August.

A Collegedale slashed tire complaint turned into something very different